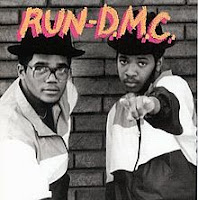 In early 1984, one of the first old-school rap groups to make it big was Run-D.M.C. The self-titled debut album, released on March 27th, from this group from Hollis, Queens, New York is considered a groundbreaking record. They combined sparse beats (delivered expertly by Jam Master Jay) with aggressive vocals (by Darryl “D.M.C.“ McDaniels and Joseph “Run” Simmons) and some guitar riffs (by Eddie Martinez) to create a new sound that contrasted with the earlier hip-hop recordings.

The record has been recognized by many sources for its innovation. The Source gave it a five-star rating and listed it on their 100 Best Rap Albums. Rolling Stone magazine gave it four-and-a-half stars, and placed it at number 51 on their 100 Greatest Albums of the 1980’s list and number 240 on their 500 Greatest Albums of All-Time list. Spin magazine gave it a rating of 9 out of 10. It also appears on the list of 1001 Albums You Must Hear Before You Die.


Side one starts with “Hard Times”, a song that Simmons was one of a number of the writers on; it first appeared on the 1980 debut album by Kurtis Blow. This second single from the album speaks of the difficulties everyone was facing, but the guys advocate pushing through in order to overcome them.

“Rock Box” was the third single from the album; the video for this track was the first rap video to appear on MTV. It combines sampling with a heavy guitar groove, which likely opened their music up to a larger audience than early rap (which tended to sampled disco and dance music). Rock music would be key to future collaborations with other groups. The rap explains how the guys use rock to deliver their rhymes.

“Jam-Master Jay” spotlights the DJ skills of the crew’s mix-master. The scratches and cuts are sharp, and the beat is steady.

“Hollis Crew (Krush-Groove 2)” is typical of early rap, where the artists will brag on their skills. This was a typical “challenge” rap that often went on between crews, much like break-dance crews would challenge one another. “Sucker M.C.’s (Krush Groove 1)” continues along the same vein. In fact, the backing tracks are awful similar to one another, aren’t they? This could possibly turn off the casual listener, but I disagree. Rap is about the rhymes, and these guys were some of the first to make them more complex and sophisticated.

Side two opens with “It’s Like That”, one of the first songs ever released by the band (they did so on a simple cassette before getting a full record deal). It paints the picture of life in Queens at the time, with emphasis on some of the less positive aspects (unemployment, inflation, death, etc.). This is my favorite track from the album.

“Wake Up” talks about a dream of world unity and peace. But in the end, we have to wake up and make this a reality. It is an old-school rap version of Dr. Martin Luther King’s famous “I Had a Dream…” speech, of sorts.

“30 Days” was the fourth single from the album and has been featured on the sitcom Everybody Hates Chris (the 2005 show that is set firmly in the 80’s). The song is about a man who is guaranteed to be as good as his word, or you can send him back after the trial period is over.

The album ends with “Jay’s Game”, a track that once again spotlights Jay’s abilities with the turntables.

The first time Run-D.M.C. registered on my musical radar was in the fall of 1985, the beginning of my Junior year of college. I was working my first co-op job in New Jersey and going to see a lot of movies. One of the films I saw was Krush Groove, a film that focused on the growing popularity of the hip-hop music scene. It starred Run D.M.C., Sheila E., the Fat Boys, Kurtis Blow, LL Cool J, with appearances by New Edition and the Beastie Boys. Musically, the film had a lot to offer (I’ll go more into that on a future “Soundtrack Sunday”).

After seeing the film, I was interested in finding out more about some of these acts. I picked up Run D.M.C. on cassette and played it a lot on my boom box (which felt very appropriate). It is a good debut and showed the potential that the band would exploit on future releases, like their 1986 mega-seller Raising Hell.

I find the best way that I can enjoy early old-school rap is by having them sprinkled in occasionally into a mix - by doing song shuffling on my iPod or purposely putting some into play lists. Listening to a full forty minutes of an album like this from the same artist can get a little repetitive in spots.
Posted by Martin Maenza at 5:30 AM