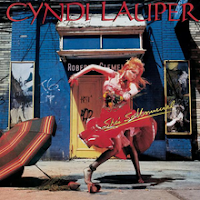 On October 14th of 1983, a new personality burst onto the music scene with her debut album She’s So Unusual. Many felt the title was apropos, especially after seeing her first videos on MTV - with her fire-red hair done is a punk-like style, vintage style clothing, and her flair for humor. Of course, I am speaking of the one and only Cyndi Lauper.


Cyndi was born and raised in Queens, NY. She started her career as a vocalist in various cover bands, but she really longed to perform her own music. In 1977, she damaged her vocal cords and was told that she would never sing again. With hard work and lots of vocal exercises, she proved those doctors wrong. She worked her days at a high-end New York thrift store while returning to the stage as part of a group called Blue Angel. That’s when she was discovered.

She’s So Unusual spent seventy-seven weeks on the US Billboard Hot 100, peaking at number 4. It also charted very well the world over - number 23 in Germany, number 22 in Sweden, number 16 in the UK, number 14 in France, number 8 in Switzerland, number 4 in Australia and New Zealand, and number 1 in Canada. All together, it has sold over 9 million copies. Rolling Stone magazine ranked it number 494 in its Top 500 Albums of All-Time and number 75 in its Top 100 Albums of the 1980’s. The album garnered Cyndi six Grammy nominations including Record of the Year, Best Female Pop Vocal Performance, Song of the Year, Album of the Year, Best Album Package and Best New Artist. She won the awards in those later two categories. Not to shabby for the first time out of the gate.

This is one of those records I picked up on vinyl as soon as I could. I loved her debut single and was very confident the rest of the package would be equally to my liking. I was not disappointed in the slightest. Purchased from my hometown record store, this album was in heavy rotation during my Freshman year of college and for many years afterwards. It was another one of those records I immediately bought in CD format when my turntable was no longer an option. To this day, this album is one of my favorites from that year.

Side one opens with “Money Changes Everything”, a song first recorded by the underground band the Brains in 1979. The song features Rob Hyman, of the band the Hooters, playing a Hohner Melodica (a keyboard played by blowing air through a mouth-piece) in the song’s solo around the three minute mark. The song cautions about how success can change the dynamics of relationships if you’re not careful. It is a solid start to the record. As the fifth single, it went to number 54 in Germany, number 27 on the US Billboard Hot 100, number 23 in Canada, number 19 in Australia, and number 14 in New Zealand.

Next up is the smash debut single “Girls Just Want to Have Fun”, a song written by Robert Hazard (who recorded it in 1979) and reached all the way to the number 2 position on the Billboard charts. Around the world, it hit number 2 in France and the UK, and number 1 in Australia, Canada, Ireland, New Zealand, and on the US Billboard Dance chart. Hazard’s lyrics were written from a male point of view; Cyndi spun the song around with some minor changes, which Hazard approved of. The song opens with keyboard slide that, when heard through headphones, travels from one ear all the way to the other. Very cool effect. The song is infectious with its music and chorus, and the incredibly popular video helped it to become an anthem of female empowerment. This song was a great one to dance to; everyone gets into it - guys and girls alike. It has a chorus that is very hard to resist joining in and singing, and really why should you resist? Everyone wants to have fun!

Cyndi next covers the Prince song “When You Were Mine”, which appeared on his 1980 album Dirty Mind. Her version is more of a mid-tempo ballad with synthesizer base. She kept the pronoun genders the same as the original, which caused much speculation about the sexual preference of the other lover. As a huge fan of Prince, I find that her version holds up very well. She embraces the song, as she did with the other songs she covered on this album, as if they were her own. The song charted at number 62 in Canada.

“Time After Time”, which she co-wrote with Rob Hyman, was her first number 1 record on the US Billboard Hot 100. It also reached number 10 in Sweden, number 9 in France, number 7 in Switzerland, number 6 in Australia and Germany, number 3 in the UK, number 2 in Ireland and number 1 in Canada. This song is beautiful, a perfect combination of a straight-forward melody and immensely personal and relatable lyrics. This song touches my heart every time I hear it. The college I attended had an affiliation with the National Technical Institute of the Deaf. As such, we had a large population of hearing-impaired students on campus. When I was first learning to pick up sign-language, I often found it was easier to learn words if I learned how to sign the lyrics of songs I liked. “Time After Time” was one of those songs I learned. I still remember how to sign parts of it twenty seven years later.

“All Through the Night” was the fourth single from the album, staying on the US Billboard Hot 100 for fourteen weeks and peaking at number 5. It also charted at number 64 in the UK, number 35 in Germany, number 19 in New Zealand, number 17 in Australia, number 16 in Switzerland, and number 7 in Canada. The song was written by Jules Shear as a mid-tempo folk-rock song. The Cars recorded a version of their own by did not use it on any of their albums. She took the song down the pop ballad route which worked quite well. The tempo on this one gives the feeling of seconds ticking away, giving it a perception of forward, fleeting motion. Cyndi’s vocals on this one show off her impressive vocal range as well.

She co-wrote the song “Witness” as well. I really like the synthesizer work on this one. It gives it a great echoing sound in the background. The rest of the song has a Reggae feel to it, which again shows Cyndi’s interest in varying musical styles.

“I’ll Kiss You” is collaboration between Cyndi and Jules Shear. The music on this one is Ska-influenced with fun lyrics (the story of a woman on a quest for a love potion). Again, the synthesizers add to the quirkiness of the songs. This is probably my favorite of the non-single tracks from the record.

“He’s So Unusual“ was a song from the late 1920‘s, originally performed by Helen Kane, the inspiration for the cartoon character Betty Boop. Many might compare Cyndi to Betty Boop in that both have a very sexy personas and unique sounding vocals. This song fits her very well. This short track then segues into the final track “Yeah Yeah”. This one has a really neat effect to it - Cyndi does some Boop-like backing vocals behind her lead vocals, which all channel through one audio channel. If you listen to this one with just one headphone in, you might be missing out on some of it. The saxophone on this one gives it that added sexiness. This one is a toe-tapper for me.

I have to mention one more song with connections to this album - “Right Track Wrong Train”. It was released as the B-side of “Girls Just Want To Have Fun” but does not appear on the record. I had this one on a 45 back in the day, but had not heard it for a long time until just this past weekend (I found I could download it on eMusic and immediately did so without hesitation). It is a fun little number that compliments the rest of the debut album. I consider it the unofficial eleventh track.

This album made me a fan of Cyndi’s for life. Since this record, I often have jumped upon any new releases by her - it doesn’t matter if I’ve heard a single track from them or not. I find that she’s the type of artist that will always entertain me. It doesn’t matter what style she’s doing - be it pop songs, holiday music, musical standards, acoustic and even most recently the blues. She puts her heart into everything she does, and the pure joy she gets from performing radiates from them.
Posted by Martin Maenza at 6:05 AM

She's great. Her autobiography was great too. I just finished it. Thanks for taking the time to review her breakout album. It's a real masterpiece. There were few 1st albums better at the time than this except maybe for Whitney Houston's.