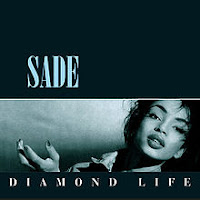 Last Spring, comedienne Wanda Sykes had a very short lived Saturday night show that combined talk and humorous sketches that aired on FOX. I think I was probably one of a dozen or so folks who actually watched it before it got cancelled. Anyway, one of ongoing things she was obsessed about was trying to get Sade to come on to the show. Sade had just released her sixth studio album, the first one in ten years, and Wanda was a huge fan.

Today, I want to look back at Sade’s debut album Diamond Life which was released in the UK on June 16th of 1984 and in the US in early 1985. And though the band is named after lead singer Sade Adu, it is really an English R&B band that combines elements of jazz, soul, funk and soft rock into a beautiful fusion of sound. The album was a slow starter that eventually made it into the top ten hit in a number of countries.


Side one opens with the smash hit “Smooth Operator”, which reached number 5 on the US Billboard charts and number 1 on the Adult Contemporary charts. The song, about a fashionable jet-setting man who loves and leaves women in his wake, opens with a spoken recitation. It then swells with a jazzy swing that features the sweet saxophone sounds of Stuart Matthewman.

“Your Love Is King” was the third single from the album. While it failed to break the top 40 on the US Billboard charts, it was the highest charting single for the band in their native UK (topping out at number 6). It begins with saxophone and then develops into a sultry R&B groove. The song is a celebration of the intimate moments with a lover.

“Hang on to Your Love” starts with a simple piano line by Andrew Hale and a funky guitar groove by Matthewman. The percussion by Paul Cooke and Dave Early is steady and supportive without being overbearing. It all blends together very nicely.

“Frankie’s First Affair” has a nice slow-groove to it with cool saxophone to support the vocals.

“When Am I Going to Make a Living” was the second single from the album. It sounds like the type of song one could have heard in the late 70’s in the disco era, a subtle slower tempo but one with still a lot of rhythm and movement.

Side two starts with a slice of “Cherry Pie”. This one has a funky guitar groove. Sade’s vocals simmer on this one as she laments how the sweetness of the early days of love has gone sour.

“Sally” is next, followed by “I Will Be Your Friend”. Both are nice, easy listening tunes. They put me into a relaxed state.

The album closes with the question “Why Can’t We Live Together?” This one is a cover of the 1972 tune by Timmy Thomas (one that has been covered by many over the years including Marc Anthony, Joan Osborne, Steve Winwood and Maria Muldaur. The song has two minutes of instrumental before Sade joins in with the vocals about unity and harmony amongst people. Again, another pleasant listening experience.

I first started hearing tracks from this record in the spring of 1985 when I was finishing up my sophomore year of college. That summer, I worked my first co-op job for a small information processing company in New Jersey. Traveling light, I listened to most music at that time on a boom box so most records I bought during that period were on cassette. Diamond Life was one of the albums I purchased in that format at that time. For the most part, I was interested in the first two tracks - the big hits. But I did find the whole record to be rather enjoyable and quite soothing. Something about the cool jazzy feel and Sade’s smooth, sexy voice made the music flow so well.

Listening to it again today (first time in a good two decades), I am very impressed with how well it still holds up twenty six years later. I’ve already added it to my save-for-later list on eMusic with aI plan to download some of these tracks to my digital music library soon.
Posted by Martin Maenza at 8:35 AM

once again, a great review.

Sade is amazing. In my vast love of music, dark and hard, smooth and light, Sade has a certain something words cannot describe.

As always, I appreciate your comments. Sade does put a lot of texture into their music - you can feel it. It is like your senses come together when you listen to it - not just hearing it. Great stuff.