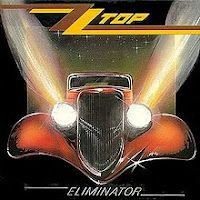 ZZ Top had been recording since 1971 and had quite a bit of success so far. On March 23rd of 1983, the blues-rock band from Texas put out their eighth studio album Eliminator, and it became their most successful album.

Chart-wise, it went to number 13 in Norway and Sweden, number 11 in Switzerland, number 9 on the US Billboard Hot 200, number 4 in Austria and New Zeland, number 3 in the UK and number 2 in Australia. It was ranked number 39 on Rolling Stone’s 100 Greatest Albums of the 80’s and number 396 on that magazine’s 500 Greatest Albums of All-Time list. By 1996 it had achieved Diamond status (selling over 10 million copies world-wide).


Side one starts with the hit “Gimme All Your Lovin’”, the first single released from the album. Did you know it only reached number 37 on the Billboard singles chart? I know! Hard to believe, but the numbers don‘t lie. The video for this one (you remember it - the red signature car shows up at the gas station to help a young man fed up with his menial job) was all over MTV. It starts with that drum-beat intro, courtesy of Frank Beard, that is quickly joined by the wailing guitars of Billy Gibbons and Dusty Hill. You know from just the opening thirty seconds that the band is ready to rock the house. Turn it up! Great guitar solos near the end of the song too.

“Got Me Under Pressure” is next. It has a nice, rapid-fire beat that gets your feet tapping. It is a rocking song that describes a woman that drives the singer wild. In typical ZZ fashion, the lyrics are full of sexual innuendos and references.

“Sharp Dressed Man” was the second single from the album and it didn’t even break the top 40 on the Billboard charts (it got as high as 56). Again, what’s up with that? This video was even more popular on MTV (it is the one that continued the story line of this album - the ZZ-women and the car take him to get all decked out with new threads and a new lease on life). Video clearly did kill the radio start it seems. Another classic opening. I love the gutter growls on this one. They really add to the raw, sexual vibe to this one. I like the message too - “guys, if you look your best and put that out there, the ladies will notice!”. This is certainly how I tried to present myself when I hit the parties and dance floors in college.

“I Need You Tonight” has a much bluesier feel to it, a nice change after three rocking numbers.

“I Got the Six” rounds out the side. It is a short number (under three minutes) but it packs a punch. And, again, there are those in-your-face sexually charged lyrics.

Side two kicks off with “Legs”, the highest charting single from the album (it got all the way to number 8 on the US Billboard charts). The video for this song had the ZZ-women and the car coming to the rescue of a pretty young salesgirl, giving her a new makeover and helping her exact revenge against her abusers. Of course, the song is an ode to a gal with great gams. This song, along with the other singles, was very popular songs to dance to back in the day. Where “Sharp Dressed Man” allowed the guys to strut their stuff, this tune let the ladies take the spotlight. Good stuff.

“Thug” has a neat syncopation of guitars to it that I found very cool. The song has a different kind of musical structure to it too that makes it a stand-out from the other tracks.

“TV Dinners” is a straight-forward song about pre-packaged, microwavable meals. The video for this one utilized claymation to bring to life this quirky little ode.

The opening of “Dirty Dog” shows yet more cool guitar tricks that these guys have in their musical arsenal. The title allows them to call out a loose woman with out going right out and calling her a “female dog” (we all know what word I’m referring to…).

“If I Could Only Flag Her Down” sticks with the tried-and-true rhythms that accompanied the hits from this record. If you like those songs, as I do, you’ll find this one right up the same alley.

The side and album ends with “Bad Girl”. Like the previous track, it has a solid foundation to it.

This isn’t a record that I owned personally, but I knew a number of folks in high school and college who did. Also, the album oriented rock stations tended to mine the deep cuts from this one as well. So, I certainly had more than a passing familiarity to this one before doing this review. The hit songs were all over MTV as well, with some of the most memorable videos at the time - great visuals and stories. They were also big crowd pleasers at the local bars and college parties for the next few years after.

I find Eliminator to be a straight-up rock record with a little bit of variety to keep it from going stale. I like that the music has a hard-driven edge to it and that the lyrics are pretty straight-forward. I don’t have to think when listening to this record - I can just sit back and let it take the wheel. It is great music for driving to - just turn it up and roll down the highway.
Posted by Martin Maenza at 5:09 AM

I know the singles from this album very well, but have not heard the rest of the songs yet. At any rate, amazing how this band came back in the 80's and put the spin on things and rocked the charts.

I've argued more than a few times that 'Eliminator" is one of the ten best rock albums of all time. It has high charting singles, heavy rotation singles, iconic album art, solid b-sides, obvious roots in blues, and is one of the first albums to do well on the strength of its videos. Love this album to this day and I bought it when it came out.