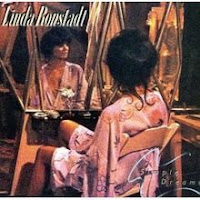 Welcome back for another edition of “Seventies Saturday”.

In 1977, country-rock singer Linda Ronstadt released her eighth studio album Simple Dreams. This record is one of the most successful releases of her career; it spent five consecutive weeks at the number 1 spot on the Billboard Album charts and it even knocked Elvis Presley off the number 1 spot on the Billboard Country charts. It was also her fifth consecutive million-selling Platinum album, selling over 3.5 million copies in less than a year in the US alone in 1977. To say it was a popular record would be a huge understatement.


With the singles from this album, Ronstadt was the first female to have two singles in the top five at the same time (and she was the first act since the Beatles to do so). She received two Grammy nominations from this album - one for Record of the Year with “Blue Bayou” and the other in the category of Best Pop Vocal Performance Female.

Side one begins with her version of the 1958 Buddy Holly classic “It’s So Easy (To Fall In Love)”. The single reached number 5 on the US Billboard charts. Ronstadt’s version, of course, has a country spin to it, utilizing steel guitar and a stronger drumbeat than the original. She clearly makes this classic from the early days of rock 'n roll her own.

Next is “Carmelita”, a song written by Warren Zevon (it appeared on his self-titled debut a year earlier). It is a song about a person strung out on heroin in love with a Mexican girl. It is kind of a curious song choice for Ronstadt to do, but clearly, she was a fan of Zevon’s. She does the song justice in her signature style.

“Simple Man, Simple Dream”, a tune penned by J.D. Souther, follows. Ronstadt and Souther share a common country-rock feel, thus this song is a good fit for her sweet vocals. It is a song of inspiration and reaching for one’s goals.

“Sorrow Lives Here” offsets Ronstadt’s voice with a simple piano accompaniment. It is almost a precursor to her run on Broadway just four years later. She was hardly a one-trick (stone) pony - she could clearly do much more than just country as evidenced here.

The side closes with “I Never Will Marry” where Dolly Parton joins her on the vocals. It would end up being almost a decade later before the two, along with Emmy Lou Harris, would join for the album Trio. Nevertheless, this little taste shows how well their two voices blend on the harmonies of this traditional country song.

Side two kicks off with the hit “Blue Bayou”, which was written by Roy Orbison. Ronstadt’s version did immensely better on the charts; her version peaked at number 3 while Orbison only got the song to number 29 on the US charts back in 1963. I really love how this one starts out slow and builds to the chorus where Ronstadt’s voice carries the emotion of the song. For some reason, this song reminds me of “home” - not any place on the water (even though my hometown was on Lake Erie) - but that feeling of home, where the heart is. It is definitely my favorite song from the album.

Another Warren Zevon penned track is next - “Poor Poor Pitiful Me”. It too appeared on Zevon’s debut album a year before. Ronstadt though changed the gender in the lyrics, making it more appropriate for a female singer. Once more, she does the original songwriter proud with a solid rendition. The guitar work gives this one more of a rock feel with country nuances in the background.

“Maybe I’m Right” slows things down a bit. It is a much more stripped down song, featuring just guitar and the voices (Ronstadt and then some background singers in the later half). It is a nice respite for the middle of the side.

Next, she takes on the Rolling Stones hit “Tumbling Dice”, which appeared on their 1972 album Exile On Main St. Unlike the Stones’ version that broke the top 10, Ronstadt’s version didn’t even make it to the Top 30. However, I like her version. I think the clarity of her delivery helped me understand the lyrics of this song for the very first time. She gives it every bit of attitude that Mick Jagger does, adding to the sexy side of her persona.

The side and the album end with “Old Paint”, another more traditional country song. Again, this is a pleasant mix of her entrancing vocals with guitar accompaniment.

This is another of the early albums that I had on vinyl in my collection. I believe I got it from a mail order record club (anyone else remember those?) - my brother and I went in on the club together. On the initial twelve albums for a penny, I seem to recall he got eight and I got four (he was older so I had to take what I could get). After that, we split the number of have-to-purchase down the middle. Simple Dreams was one of the records I got from the club.

I remember listening to this one a lot, just staring at the album cover (both sides) and liner notes while I did. I did not know that a number of the songs were covers. I was only twelve years old and my music knowledge was not that fully formed. Still, I liked what I heard (and liked what I saw - Linda Ronstadt was a stone-cold fox! - very important for a budding pre-teen in Junior High school who was just deciding that girls weren't icky). She definitely was the first country artist whose album I bought. I am happy to say that this album represents just part of her career spanning music that is in my collection.
Posted by Martin Maenza at 8:09 AM