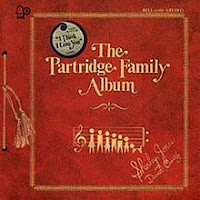 Welcome to another edition of "Seventies Saturday". This time we're digging into the back recesses of the music closet - to the corner where we hide our bubble-gum music for fear that someone might stumble across it while flipping through the stacks and let out a hearty "ha-ha" (ala Nelson from the Simpsons). We're not really ashamed of it - we like the simplicity of the pop songs; we're just maybe afraid to lose a little cred with our peers. Ah, who cares? It is all part of the musical mosaic of the decade.

In September of 1970, a half-hour American sitcom debuted on the ABC network. The Partridge Family was the story of a widowed mother trying to raise her five kids. The kids decide to help out by forming a band to help out, practicing in the garage after school. Add in their manager and a psychedelic bus, and you have the foundation for a hit show that ran four seasons (and was a syndication juggernaut for decades after). I grew up on this show and the songs interspersed in each episode were always a highlight.


As most people know, the only actors who actually sang on any of the songs were David Cassidy (doing nearly all of the lead vocals) and Shirley Jones (doing some background vocals). Everyone else lip-synced and mock-played instruments in the episodes (sometimes glaringly obvious). Think of them as the precursors of Milli-Vanilli. Despite that, the music was actually well done. Produced by Wes Farrell, the show released a number of albums and singles to the music charts for eager fans to snap up. The 1970 release the Partridge Family Album was the first, with a record jacket that was done in the style of a photo album you might have seen on any family's coffee table back in those days.

Side one opens with "Brand New Me", a sweet song where the guy tells his lady he's going to change his ways and dedicate himself only to her. Even though it is simple and straightforward, it has some nice musical elements as a foundation. Next up is my favorite song from this record hands down.

"Point Me In the Direction of Albuquerque" was featured in one of the early episodes where the family encountered a runaway teen. The song tells a great story in 3:52, something which a lot of music from that era did. The refrain gets stuck in my head, echoing through the recesses of my brain. The music is again simple but well done. Five stars on my iPod.

"Bandala" appeared in an episode where the family helps a town throw a block party to raise some money to save a failing business. This was the episode that guest-starred Richard Pryor. The music on this one has a very multi-cultural ethnic feel to it, showing that Farrell and the song writers could provide diversity in the offerings. Its festive mood gets your toes tapping.

"I Really Want To Know You" stands out because it does not feature David Cassidy on the vocals (Shirley is there though). The song was actually recorded the same year by the Cowsills, the family group that served as inspiration for the Partridge Family. It isn't one of my favorites even though it is a pleasant enough song; it simply does nothing for me.

The side ends with "Only A Moment Ago". This is a song about heartbreak, about how things can change in a single instance.

The side ends with "I Can Feel Your Heartbeat", a more upbeat song about love (we need that counterbalance here). The guitar work on this one is amazing, and the drums echo the beating heart of the singer as it beats faster when full of emotion. It builds to a crescendo nicely and that final "STOP!".

Side two opens with "I'm On the Road", another song that features just the studio singers. It was used in the first episodes, as the family hits the road to perform their first public gig. Again, not a big favorite of mine - without having David on leads, it just isn't "the Partridge Family" to me.

"To Be Lovers" is next up. The studio musicians take the lead on this one as well, but David comes in at the halfway point and interjects for a verse. It sort of seems out of place, like a last minute though. This is likely one of the first songs they did for the show where they realized that David might actually be a better fit as the focus of the songs. Good conclusion. He was very much the face of the show, the focal point of the marketing and a guarantee sell to all the teenaged girls who watched the show religiously.

"Somebody Wants To Love You" returns things back to the formula that works. David advises that in life you have to keep your eyes open. The right person just might be standing right there in front of you. The music features a lot of pop-rock elements that were prevalent in songs at the start of the 70's decade.

"I Think I Love You" was the first big hit for the group. It spent sixteen weeks on the Billboard charts, reaching the number 1 spot in November of that year. It held the top spot for three weeks against the likes of the Carpenters, the Jackson 5, Smokey Robinson and Miracles, and James Taylor. That, my friends, is the power of TV marketing and the appeal of the teen idol. I love the combination of the vocals with the organ on this one (they create a great mood). It can't help but put you in a good mood.

"Singing My Song" ends the side and album. It begins with a simple guitar strum and then opens up with the chorus. The layers work well together - music, backing vocals, lead vocals - like a cheesy dip that you just want to take a chip and dive into.

I have been a fan of this music since I saw those episodes first run in 1970. My cousin Joan had this record on vinyl. My brother had "I Think I Love You" on a 45. I'd listen to both when I got the chance (I was just a kid of five at the time of their debut). Again, thanks to instant reruns that would air on a local TV station through out the late 70's, not a day would go by without a chance to see an episode and hear some songs by the group. I'll even admit that I had a binder featuring the actors from the show - kept filler paper in it where I wrote some of my very first stories in the mid-to-late 70's (I still have those stores but not the binder though - after about seven or eight years of constant use it was pretty much shot).

Follow this link if you want to see YouTube videos of any of these songs - click here - it'll allow you to experience the songs for yourself.
Posted by Martin Maenza at 8:05 AM