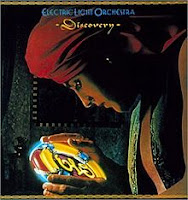 In 1979, the British rock group Electric Light Orchestra (ELO for short) put out their eighth studio album Discovery and was a smash seller world-wide. It was their first number 1 album in their native UK (it debuted at the number 1 spot and stayed there for five weeks) and in Norway, and their second number 1 album in Australia. It went to number 2 in Sweden, number 3 in Austria, number 4 in Italy and number 5 in the United States. In most places, the album stayed on the charts for over half a year (in some places a little more than a year). The album also produced five singles total.


Little known fact, comedian/actor Brad Garrett (known most famously for playing the brother Robert on Everybody Loves Raymond) is one of the models on the back cover of the album, dressed in middle eastern clothing and turban and holding a big sword.

Side one opens with “Shine a Little Love”, the first single from the album. It peaked at number 6 on the UK singles chart and number 8 on the US Billboard charts. The song opening has a mysterious feel to it before exploding into a disco beat and rich string orchestration. The song is full of energy and positivity. I love the production on this one a lot; the perfect way to open up the record.

“Confusion” was the fourth single released from the album, reaching number 8 in the UK but only number 37 in the US. Acoustic guitar and a vocoder (a voice encoder used to create a synthesized speech) were used on this song to give it a unique sound. This song is beautifully done, and it is a precursor to what the group would do a year later for the Xanadu soundtrack.

“Need Her Love” slows things down a tad with a sweet song about how much the woman fills a hole in the singer’s life. The guitar work on this one is very nice.

“The Diary of Horace Wimp” was the second single released from the album. While this Beatlesque track did well in the UK and Ireland (broke the top 10 on both), it wasn’t received as well in the rest of the world. The song covers a week in the life of an introverted man who eventually overcomes his shyness. The vocoder is used quite a bit on this one as well.

Side two rolls out of the station with “Last Train to London”, the fifth and final single. Again, it scored in the top 10 in the UK and Ireland. In the US, it barely broke the top 40 (stopping at number 39). I really love the music on this one. The rhythm and the strings really give it a sense of movement, of a locomotive pulling away from the platform with the smoke from the engine puffing out into the night sky.

“Midnight Blue” has a gentle piano accompaniment to it for the first verse, and then additional orchestration is added for the remainder of the song. The vocoder makes another appearance to give the title words at appropriate spots.

“On the Run” brings us back to the up-tempo with another bouncy song. The band continues to experiment with the various musical effects to enhance the song.

“Wishing” opens with a haunting whistle and then drops into the main movement of the track.

The album closes out with “Don’t Bring Me Down”, the third single from the album. It scored in the top 10 on all the major charts world-wide. The song has also been covered by nearly a dozen bands over the years on albums and in concert. The song has a steady, rocking beat with repeating guitar chords and a sing-along chorus that make it my favorite track on the record.

This is another one of those albums I picked up on vinyl during junior high school (specifically the spring of 8th grade). I had become a fan a few years earlier with their double-album Out of the Blue; this release just added to my love of the band. I might not have known a lot about music (the complexities of orchestration, etc.) but I knew this stuff was amazing. Jeff Lynne has composed a number of rock masterpieces over his long career.

ELO will always be one of my favorite 70’s super-groups.
Posted by Martin Maenza at 6:20 AM

I recommend putting an amazon affiliate link to the CD (or movie or whatever)when you review it. Someone might like to impulse buy it based on your review, and you could earn a little bit.