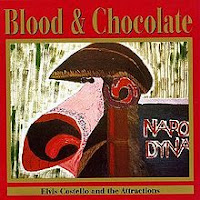 For his eleventh studio album Blood & Chocolate, released in the fall of 1986, Elvis Costello reunited with is usual backing band the Attractions and with producer Nick Lowe. While the album did well on the UK album charts (peaking at number 16), it failed to make it onto the US Billboard album charts.


“Uncomplicated” is the first track on side one. It opens with a tribal beat and the album’s title as the first lyrics of the song. The mix of instruments on this one is intriguing; a combination I had not heard previously but one that works well for me. The lyrics talk about a failing relationship, at least in the eyes of one of the parties.

“I Hope You’re Happy Now” has that classic Elvis Costello sound that I had grown to love in the early 80’s. The song speaks of a couple seeking different things in a relationship.

“Tokyo Storm Warning” has a nice swinging up-tempo beat that contrasts Costello’s lyrics that compare a relationship to a world of death and violence. Still, the song holds together very well.

Things slow down a bit with “Home Is Anywhere You Hang Your Head”, a song about unrequited love and obsession.

“I Want You” has a nice acoustic guitar accompaniment. It then joined on the second verse with a little more of the band. It is a nice way to build layers to the song, like peeling an onion in reverse. The lyrics continue the theme of obsession, making it the perfect compliment to the previous track. The continued repetition of the three word title is like a mantra.

Side two starts off with “Honey, Are You Straight or Are You Blind?” As always, Elvis shows he’s the master of combining old time rock ‘n’ roll sensibilities with a present day sound.

“Blue Chair” is next. The song continues the theme of longing love, to the point of depression.

“Crimes of Paris”, “Poor Napoleon” and “Next Time Round” too are about troubled relationships, the whole theme of the album.

Clearly Elvis Costello was working through something with this album, though I am not sure exactly what. At the time he was involved with Cait O’Riordan, the former bassist of the Pogues; the two were married from 1986 to 2002. The songs had to be written before that relationship started (or in the very early days of it). So why they would have produced such tragic or bitter stories is beyond me. Perhaps they were leftovers from his first failed marriage to Mary Burgoyne and he felt they’d all make a nice thematic presentation. Hard to say.

I like the songs on here well enough individually. Together though they seem to be a bit of overkill, to me. If I were likely to listen to this album I would tend to do it more on a shuffle with other songs rather than as a whole unit. It’s too much of a downer all together.
Posted by Martin Maenza at 5:28 AM