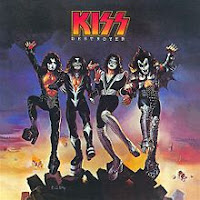 Welcome to another edition of "Seventies Saturday".

In the spring of 1976, the American rock band KISS released its fourth studio album Destroyer. It was the second album by the group to reach the US top 20, and it was certified gold after just a month. The sales started to cool though as quickly as they had started, and the record dropped fast. The unexpected interest in one of the B-sides that radio stations had been playing re-sparked the sales. "Beth" was re-released as a single, giving the band their first top 10 song. Rolling Stone magazine, who initially panned the album in its first reviews, later ranked it number 496 on their 500 Greatest Albums of All-Time list.


The album cover was painted by fantasy artist Ken Kelly. I was eleven years old at the time this record was released and had just got into super-hero comic books (before then I read mostly kid books like Richie Rich, Casper, Gold Key titles, Dennis the Menace and Archie books). So, for me, this cover was simply very cool. The guys from KISS had larger than life personas, and this cover captures that aspect nicely.

"Detroit Rock City", the third single released from the album, kicks off the first side. The lyrics are about an actual fan that was killed in a car accident on the way to a KISS concert. The song even opens with a radio news report and then the sounds of someone starting their car, and it ends with the car crashing. The three part dueling guitars on this one are a signature trademark of the band, and they drive this song hard. It is one of those songs I'd definitely put on a "road-trip" mix, right along side Golden Earring's "Radar Love".

"King of the Night Time World" is a typical track that speaks to the disenfranchised youth. They may be stuck living at home, but in their dreams they rule the night with their best girl at their side.

"God of Thunder", though written by Paul Stanley who planned to do the lead vocals, is sung by Gene Simmons. It subsequently became his "theme song" for concerts, and Gene would pull out all the stops when performing it (this typically included his famous spitting-of-blood). It harkens back to the earlier days of heavy metal rock - with heavy guitars, thumping beats and growling vocals. The song features, oddly enough, children's voices and laughter through out.

"Great Expectations" is a lighter ballad, with Gene giving a different side to his vocals. He is even backed by the Brooklyn Boys Chorus on this, which gives the song an interesting feel. It is a heavenly contrast to his stage persona of "the Demon" of the group.

Side two opens with "Flaming Youth", the second single released from the album. It is also another signature anthem aimed at the band's youthful audience. Think of it as the rocking father of Debbie Gibson's "Electric Youth" over a decade later. And, yes, that is a calliope you hear in the backing of this track.

Next up is "Sweet Pain". The guys change up the rhythm a little on this one, and the chorus features a multi-syllable pronunciation of the last word in the title.

"Shout It Out Loud" was the first single released from the album. This anthem is designed perfectly for a loud audience sing-along on the chorus, with heads banging and fists thrusting in the air. The song was covered by the boys from Glee in a season 1 episode in 2010.

As mentioned before, "Beth" started out as a B-side but was so popular that the studio released it officially as a single of its own. Drummer Peter Criss co-wrote the song and takes the lead vocal duties on it as well. The song features piano and a string orchestra, something one would never expect on a KISS record. In fact, the four band members do not play any instruments on the track - further making the song a standout. It's very much the "softer side of KISS". However, I think it is a wonderful song - a simply executed ballad that has become a fixture in pop culture. It is my favorite from the album, one that I often find myself singing along to whenever I hear it. Many artists have covered it over the years (it too was covered in the aforementioned Glee episode).

On "Do You Love Me?" Paul Stanley questions the love of the woman with him. Does she love him for his material things and status, the places he can take her and the people he can introduce her to, or does she love him for who he is underneath all the make-up?

"Rock and Roll Party" is a short (1:20) instrumental hidden track that closes out the record. It has a sort of distant sound to it, like you're hearing the music echoing far and away. It doesn't do much for me though.

I heard KISS in general and Destroyer in particular a lot growing up. My older brother was very much into the band and had most of their albums on vinyl. They were a great band for teen rebellion in the mid-70's, with their thundering guitars, their explosive shows and their dedicated fan following. I could enjoy their music from the safe distance of the next bedroom; it allowed me to dabble into the darker rock and roll without giving up my penchant for the pop and disco that often came from my turntable and radio. This allowed me to have my cake and eat it too.

As an adult, I appreciate what KISS brought to the music table. As Gene Simmons and Paul Stanley have shown, they are equal parts master showmen and marketers. Their mark on rock history is evidenced by how the band has endured over three decades, despite many line-up shuffles.
Posted by Martin Maenza at 6:30 AM