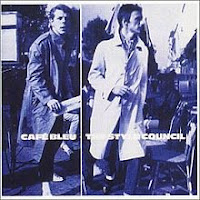 In 1983, former singer/guitarist for the Jam Paul Weller formed a new group with keyboardist Mick Talbot, drummer Steve White and vocalist Dee C. Lee. They also had studio performers on saxophone, trumpet and violin. Together they were known as the Style Council. Their debut album Café Bleu was released on March 23rd of 1984 and went to number 2 on their native UK charts. Over in the US, the album was renamed My Ever Changing Moods to capitalize on their hit single’s popularity.


I will admit that I am only familiar with the bands famed hit (I had it on a compilation CD). However, since the album does appear on the 1001 Albums list, I thought I would give it a listen today and post a first-time-hearing review.

Side opens with the short track “Mick’s Blessings”. It has an upbeat, jazzy piano groove to it. I like it a lot.

“The Whole Point of No Return” opens with a cool guitar strum and easy-on-the-ears vocals by Weller. It takes me to an intimate club setting, lit by candles in glasses on the center of small tables.

“Me Ship Came In!” has a bit of a calypso/island feel to it thanks to the saxophone, the steady drum beat and the swinging bass guitar. It is a nice instrumental piece.

“Blue Café” is another instrumental track, but this one has a gentle romantic feel to it.

“The Paris Match” is like an old torch song, featuring Dee C. Lee’s vocals over a slower tempo composition.

“My Ever Changing Moods” was the big hit single from the record. It reached number 5 on the UK charts and number 29 on the US Billboard charts. The UK album version has a slightly slower tempo than the hit single version that appears on the US album. The former spotlights Talbot’s beautiful piano work while the later adds a stronger horn section and a guitar hook.

The side ends with “Dropping Bombs on the Whitehouse”, another jazzy instrumental.

Side two opens with “A Gospel”, a track with a bit of a funky edge to it. The rhythm moves well with the rapping vocals. This one stands out from what has come before, and it was something I would have found quite enjoyable had I heard it back in 1984.

“Strength of Your Nature” is also an upbeat song, this time with a bit of a dance beat to it. I could easily see this being played in clubs back in the day, right along side early Wham or Duran Duran. Again, I would have loved this one back in 1984.

“You’re the Best Thing” was the second single from the album. Again, it did well in the UK, also reaching number 5. In the US, however, it stalled at number 76 (and this would be their last single to make it into the Hot 100 in the US). While a little slower than the last two tracks, this one has a nice groove to it and some R&B-like harmonies.

“Here’s One That Got Away” brings back the tempo and adds a little violin to it, giving it a slight country twinge to their bouncy beats. The combination really works for me.

“Headstart for Happiness” keeps that mid-tempo going with a nice duet between Weller and then wife Lee.

The album ends with “Council Meetin’”, another short instrumental track. This upbeat one features Talbot on the organ. Again, very pleasant.

Overall, I have to say the album was a nice, enjoyable listen. Side one was something I would not have generally sought out back in 1984 as it was a bit more sophisticated and laid back than this (at the time) college freshman would have been into. But, as an older adult, I can appreciate it for the many musical elements it contains. Side two has a nice party feel to it - it was something I would have gotten into very much so back then. Overall, this album has a lot going for it. It is something I’d be inclined to seek out to download today, just for the pleasant variety.
Posted by Martin Maenza at 5:14 AM