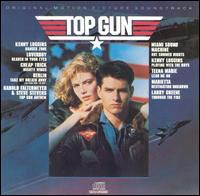 In May of 1986, the newest film to star hot young actor Tom Cruise soared into theatres. Along with Kelly McGillis, Val Kilmer, Anthony Edwards and Tom Skerritt, we all soon learned what it was like to “…feel the need, the need for speed!” The film was a box office success, landing at the number one spot on its opening weekend. It would go on to becoming the highest grossing film of the year (earning over $350 million worldwide).


The soundtrack did equally well on the charts, landing at the number 1 spot on the US Billboard Album chart for five weeks. The record featured an all-star line up of performers and produced three top twenty singles as well.

Kenny Loggins kicks off side one with “Danger Zone”. Ironically, he wasn’t the first choice to do the song. Both Bryan Adams and the group Toto passed on it before Kenny got to take a crack at it. That would turn out to be good fortune for him; the song was a hit and reached number 2 on the US Billboard Hot 100 (denied number 1 thanks to Peter Gabriel’s mighty “Sledgehammer”). It also went to number 45 in the UK, number 12 in New Zealand, number 10 in Germany, number 7 in Canada and on the US Billboard Rock chart, and number 6 in Switzerland. This one was a popular dance song back in the day. Everyone knew it from the radio and the music video. It had the right combination of percussion rhythm and driving guitars to make it nearly irresistible in the clubs.

Next up is Cheap Trick with “Mighty Wings”. An instrumental of the song was used during the film, with the full version from the soundtrack playing over the credits at the end of the film. Robin Zander and the band really capture the soaring feel of piloting a jet fighter.

Kenny Loggins returns with “Playing with the Boys”. The song was featured in the film during a volleyball scene just prior to Maverick’s (Cruise) date with Charlie (McGillis). It is not anywhere close to the powerhouse opening track, but it is a serviceable dance track that would work well on a party play list.

Teena Marie gives us “Lead Me On”. The song packs a lot of power, from the backing horns to the pounding beat to her scorching guitar work.

Berlin closes out the side with “Take My Breath Away (Love Theme from Top Gun)”. The song went all the way to number 1 on the US Billboard Hot 100 (spending a week there after knocking out “Venus” by Bananarama). Around the world, it peaked at number 15 in Finland, number 5 in Italy, number 4 in Austria, New Zealand and Norway, number 3 in Germany and on the US Billboard Adult Contemporary chart, number 2 in Canada, France, Spain, Sweden and Switzerland, and number 1 in Belgium, Ireland, the Netherlands and the UK. It also won the Academy Award for Best Original Song. This is such a beautiful love song - everyone listening to music in the 80’s knows it (it was everywhere - all over the radio, on MTV, etc.). It is one of those songs I never tire listening to. Terri Nunn’s voice is so captivating.

Side two opens with “Hot Summer Nights” by Miami Sound Machine. The band was hitting its stride by this point in the 80’s, and their Latin rhythms were guaranteed crowd pleasers. Again, another great mix tape candidate if you want something a little less familiar and overplayed.

Loverboy sings about the “Heaven in Your Eyes, which reached number 12 on the US Billboard Hot 100 and number 24 in the band's native Canada. Mike Reno’s vocals play well to the composition on this power ballad. This was a popular slow dance number in 1986; I can recall dancing to this one a number of times as closing time loomed ever closer.

Next comes Larry Greene with “Through the Fire”. The drums and guitar make this one sound like a close relation to the opening track. They both share a lot of the same elements. Greene however doesn’t carry the vocals as well as Loggins does on his.

Marietta (Waters) gives us “Destination Unknown”. She did a number of soundtrack tunes in the 80’s, including ones for Perfect, Fire And Ice and its sequel. This one has a generic feel, in a good way. What I mean is it sounds like a song you’d hear on a soundtrack, and it could easily fit on any film where you have a character sort of at a crossroads. And Marietta delivers it with a solid vocal performance.

Finally, the record closes with “Tom Gun Anthem” by Harold Faltermeyer and Steve Stevens. This instrumental track features Stevens on electric guitar, and it won the 1987 Grammy Award for Best Pop Instrumental Performance. It really builds well to a rocking finale.

The 1999 Special Edition of the album added a few other songs heard in the film: classics like 1968's "(Sittin' on) the Dock of the Bay" by Otis Redding, 1957's "Great Balls of Fire" by Jerry Lee Lewis and 1964's "You've Lost That Lovin' Feelin'" by the Righteous Brothers. The 2006 Deluxe Edition added a couple more popular tracks from the 80's including REO Speedwagon's "Can't Fight This Feeling", Mr. Mister's "Broken Wings", Europe's "The Final Countdown", Starship's "Nothing's Gonna Stop Us Now" and Jennifer Rush's "The Power of Love".

I did not own a copy of this record back in the day; in fact, I have to admit I have never actually seen the whole film (just a few scenes here and there). This soundtrack has some classic 80’s tracks, and it is worth having just for those tunes. A few of the other tracks are also very good; all together they make for a pleasant listening experience.
Posted by Martin Maenza at 9:05 AM