Echo and the Bunnymen - Ocean Rain 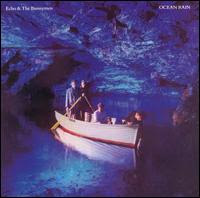 On May 8th of 1984, the British band Echo & the Bunnymen released their fourth studio album Ocean Rain. The band took a more rock sound approach to the music on this release.


Side one begins with “Silver”, the second single from the album. I like the clean, crisp music on this one. For me, it has the right blend of rock and orchestration to it. Singer Ian McCulloch seems to be channeling Bono a little bit here.

The opening of “Nocturnal Me” has a nice Spanish guitar part. The song then grows with a bigger fanfare, giving it an overall epic sound.

“Crystal Days” picks the tempo back up nicely. It is very catchy; I like that.

“The Yo Yo Man” has kind of a folksy-feel to it, with a slight dark tinge to it as well. It makes for an intriguing combination. Then the “bell” sounds in the middle make me think of something from medieval times.

“Thorn of Crowns” has some odd lyrics (“cucumber, cabbage, cauliflower…”) and equally odd vocal inflections. Still, it is not too-far out there. I certainly wouldn’t be inclined to immediately jump to the next track.

Side two opens with “the Killing Moon”. This single did well in the UK, breaking into the top 10. In the US, it mostly played on college radio and some album-oriented-rock stations. This is a song I’ve known and loved for a couple decades now. My favorite aspect is how the music hauntingly supports the chilling lyrics. It all works perfectly together.

“Seven Seas” was the third single from the album. I actually heard it on my way to work on Sirius/XM radio (1st Wave) on Tuesday morning this week. With its nice melody, it is easily my second favorite track from this record.

“My Kingdom” is next. I like the guitar chords on this one as well. Will Sergeant and Les Pattinson make it sound effortless.

“Ocean Rain” ends the album on a bit of a solemn note. It has a beautiful sound to it.

Today was my first time listening to this album in its entirely; I was familiar with a couple of the songs from the last twenty seven years but not the whole thing. Since it was one of the 80’s albums on the “1001 Albums You Must Hear Before You Die” list, I thought I would give it a shot. Overall, from a first impression standpoint, I found it to be an album that I’d certainly be inclined to revisit again. I’ve already got a few tracks earmarked for downloading in the future.
Posted by Martin Maenza at 5:28 AM