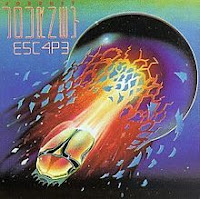 Here is an album review, by request, from one of my faithful followers on Twitter. I always appreciate the feedback and suggestions.

On July 31st of 1981, the San Francisco based band Journey released their seventh studio album Escape which has become one of the biggest sellers of their career (second only to their greatest hits compilation). It went to number 59 in Germany, number 32 in the UK, number 26 in Japan, number 6 in Canada, and number 1 on the US Billboard Hot 100. It has been certified platinum many times over and features four hit singles as well as a couple album-oriented-rock radio staples. It was also the first album by the band with new keyboardist Jonathan Cain (who replaced Gregg Rolie who had left the band the prior year).


Side one opens with the top-10 hit “Don’t Stop Believin’”, the second single from the album. It was on the US Billboard Hot 100 chart for thirteen weeks and reached the number 9 position. In the late 2000’s, it became one of the best-selling digital songs, thanks to downloads on iTunes and the licensing for shows like Glee and more. The song has an interesting structure - it doesn’t follow typical verse/chorus/verse/chorus pattern. It has a number of instrumental breaks and pre-chorus parts, but the full chorus does not come until the last minute. I really love this song a lot - it is probably my favorite Journey song; I’ve loved it since I first heard it back in 81. I always sing along with Steve Perry right from the start until the very end, much to the dismay of my teenaged son (he had to hear this song constantly by junior high kids on a school trip once - I’m trying to get him to appreciate it again). It is four minutes and eleven seconds of pure classic rock magic.

“Stone in Love” is next with a powerful guitar opening by Neal Schon and Ross Valory. Then Steve Smith kicks in that drum beat. It all comes together and making this my favorite deep track from the album. It takes me right back to that summer and then fall of my junior year of high school.

The first single from the album was “Who’s Crying Now”; it was on the US Billboard Hot 100 for fourteen weeks, peaking at number 4. Cain and Perry collaborated on this one, so it isn’t surprising that it features an amazing blend of piano and voice. This too is one of those classic rock songs that you just find yourself singing along to when it comes up. I know I do. It was a very popular slow dance song back when I was in high school (though at parts the tempo is a little more than “slow” but we didn’t care).

“Keep on Runnin’” follows with a rapid-fire guitar rhythm and driving beat.

“Still They Ride” was the fourth single from the album. It remained on the US Billboard Hot 100 for nine weeks and broke the top twenty (it peaked at number 19). This one slows things down after the last track, bringing the side to a nice close. Perry holds some amazing notes on this one, showing his vocal skills. It also has yet another amazing guitar solo by Schon. This was another slow dance favorite.

The title track “Escape” opens the second side of the record. It is a solid rocking number, and Cain pounds out some very heavy piano in the spirit of Jerry Lee Lewis.

“Lay It Down” is next. Once again, Journey’s unique take in song structure is evident on this one. That makes the songs enjoyable since they aren’t predictable or repetitive. I like that.

“Dead or Alive” has a bouncy piano line backed by hard-driving guitars and drum.

The opening of “Mother, Father” reminds me of something you’d hear by Yes or Rush. It has a big dramatic feel to it.

The album ends with “Open Arms”, the third single and the highest charting of the four from this album. It spent six of its fourteen weeks on the US Billboard Hot 100 at the number 2 spot (it couldn’t overpower Joan Jett’s “I Love Rock ‘n Roll” which held the number 1 spot for all of those weeks, plus one more). Those opening piano chords of “Open Arms” suck me every time. I hear it and I’m back at those high school dances or in the bars in 83 and 84. It is the end of the night, time for that last dance with that someone you’ve wanted to get close to all night. It is the perfect song to bring this record to a close.

Overall, I have to give this album very high marks. The first side is solid from start to finish. Side two delivers very good deep tracks plus the highest top charter. Put it all together and it is clear to see why this record was such a huge seller. It might not have been such a critical darling, but it was enjoyed by the masses. This one definitely earns a spot in any 80’s rock collection.
Posted by Martin Maenza at 5:14 AM

Woohoo! Thanks for writing up this record. I think I have it on my iPhone right now (or at least in my amazon cloud player) -- I will listen to it later in your honor.

Sadly, your mention of the song's wonderful use in the pilot of GLEE has instead got my head replaying the version by the deaf kids in the Sectionals episode.

So glad I could review this one - thanks for the request! Oh and I totally forgot the deaf school's version. LOL

great album. I recently purchased this on used vinyl and it sounds great.