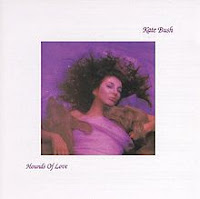 On September 16th of 1985, English singer Kate Bush released her fifth studio album Hounds of Love. It would become her second number 1 album in her native UK, and one of her highest charting albums world-wide (it went to number 1 also in Ireland, number 2 in Germany, number 6 in Australia, number 7 in Canada, number 9 in France and Sweden, number 12 in Norway, number 17 in New Zealand, and number 30 in the United States).

The album is split - the first side contains more "accessible" pop songs, four of which were released as singles. The side shares the same name as the album.


"Running Up That Hill (A Deal with God)", the first single from the album, opens the record. It charted at number 30 in The US, number 26 in New Zealand, number 16 in Canada, number 10 in Switzerland, number 7 in France, number 6 in Australia and New Zealand, number 4 in Ireland, and number 3 in Germany and the UK. Bush has stated that the song is about how men and women don't understand what it is like to be the other and that, perhaps, by swapping roles for awhile they might better relate. I enjoy the musical composition on this one; the combination of sounds and instruments is amazing.

"Hounds of Love" was the third single released; it stalled at number 84 in Canada and number 68 in Germany, but soared to number 18 in the UK and number 12 in Ireland. The lyrics talk about being afraid to fall in love, a fear that is compared to being pursued by a pack of hunting dogs. Stuart Elliott’s drums really emphasize the chase nicely.

"The Big Sky" was the fourth single from the album; it reached number 37 in the UK and number 15 in Ireland. The lyrics lament about the simple pleasures of childhood like staring up at the sky and watching clouds, things most find no time for once they get older. Kate’s vocals on this one have a bit of a “little girl” quality to them which fits the song well. I also like the tribal rhythms and chants towards the end.

"Mother Stands for Comfort" has some interesting, at times contrasting, rhythms to it. The synthesizer parts are a bit quirky though.

"Cloudbusting" was the second single released; it reached number 30 in France, number 20 in Germany and the UK, number 16 in Gelgium, and number 13 in Ireland and New Zealand. The subject of the song is psychologist Wilhelm Reich, who invented a rainmaking machine called a cloudbuster in the 1950's. Reich was arrested and imprisoned in the late 40's due to questionable medical practices. The song is told from the point of view of his son Peter. The music on this one is very much a traditional march.

The second side is labeled "the Ninth Wave", taken from a line in a poem by Lord Alfred Tennyson. It is much more experimental, using samples and vocals played in reverse to synthesizer sounds and traditional folk music.

"And Dream of Sheep", a beautiful piano ballad, kicks off the second side. It nicely showcases Kate’s ethereal vocal quality.

The ominous "Under Ice" perfectly paints the picture of someone trapped beneath a frozen river, helpless and dying. It gives me chills.

"Waking the Witch" uses samples of dialog from various sources in an effective manner. It then explodes into a demonic frenzy with clanging church bells in the distance. It all makes for a peculiar composition.

The various percussion instruments on "Watching You Without Me" create an interesting rhythm combination. They work very well with the bass guitar parts.

"Jig of Life" employs classic folk sounds, much like the Pogues did. However, Kate’s firm, sharp vocals make this song anything but traditional. She clearly puts a modern spin to them. This is a very enjoyable song.

"Hello Earth" is another beautiful ballad. I like the use of the “ground-control” samples at the beginning and the Gregorian chants later on in the track.

The side and the album end with "The Morning Fog", an mid-tempo arrangement. John William’s guitar on this one is lovely.

I can see why this is one of Kate Bush’s more popular releases. Her work is different than the standard popular music of the time, but there is a good bit of variety in her experimentation. I did not find myself at all bored with listening to these songs. They made for an interesting first-time-listening experience for me.
Posted by Martin Maenza at 5:23 AM

I love this album so much! And when ever I talk about Kate Bush, I have to tell that I come from the same town as her :)

That is so cool that you come from the same home town. Does she still live there today?