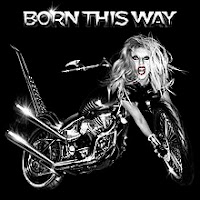 This week, the polarizing American pop-artist Lady Gaga (born Stefani Joanne Angelina Germanotta) released her latest full-length studio album Born This Way. She performed the title track back in February of this at the 53rd Annual Grammy Awards. Since then, the studio released a number of singles as well. Adding further to the promotion, the cast of Glee was able granted permission to perform the title track on a Spring 2011 episode with the same title.


Now, I will be totally upfront here. As most of my regular readers know, my musical listening tends to focus for the most part on the 80's, with the 70's and the 90's following. I do not listen to a lot of modern radio (my van Sirius/XM radio typically parks on 1st Wave, the 80's alternative channel). However, I am an avid watcher of Glee which does incorporate a number of newer artists in with their classic pop/rock and show-tunes offerings. It was, in fact, from the 2010 episode "Theatricality" where I was first exposed to Lady Gaga's songs.

This Monday when Amazon.com offered up the digital download of the Born This Way album for only 99 cents, well, that was simply a bargain I could not pass up. For the price of less than one iTunes track, I could get the full album of fourteen songs. Sold.

Therefore, here is my review of the album after a couple listens.

"Marry the Night" starts out slow but quickly explodes into a beat-thumping fury. Interesting arrangement on this one: slow-fast-slow-fast. Good for listening to, challenging to dance to.

"Born This Way" was the first single released from the album; it debuted at the number 1 spot on the Billboard Hot 100 and was the one-thousandth number 1 song in the chart's history. The lyrics serve as a proclamation of self-acceptance, a stand-up-and-shout-out of "this is who I am". I like the positive message as well as the musical arrangement behind it (even if it owes a lot to Madonna's "Express Yourself", a favorite of mine). Solid song. Definitely my favorite of the record.

The opening of "Government Hooker" is a little weird; it then segue ways into something out of an 80’s video game with blips and bleeps. This one is just okay for me - not bad but not amazing. The distortion is what turns me off.

The second single from the album is "Judas". As one would expect, there is quite a bit of Biblical symbolism in the lyrics once you get past the “Juda-ah-ah” chants. The music reminds me a little bit of her earlier hit “Bad Romance” in spots.

"Americano" features lyrics in both English and Spanish; the song is in response to the Arizona Immigration law (Arizona SB 1070). The dance-beat stays steady all the while incorporating Spanish musical influences into the mix.

"Hair" is a song of self-expression through highlights and styling-gel.

"Scheiße" shows that Gaga speaks German too (or at least can for these song lyrics). The title translates to…well…let us just say it is an expletive (I will leave you to find an Internet translator to convert it for you). I like the musical change-ups in this one.

The religious imagery is back with "Bloody Mary". The Gregorian-like chants of her name towards the end are a nice touch.

"Bad Kids" brings in a rock element to the dance-party. In this song she reaches out to the youth who might be mislabeled by their parents, teachers, etc.

"Highway Unicorn (Road to Love)" is an interesting mix of imagery. Unicorns/ponies being ridden down the road? Okay, a little weird. The message is clear about being strong and following a path to a place of encouragement and unconditional support. Not a fan of the ending part.

"Electric Chapel" opens with a rocking guitar and a tone reminiscent of Mike Oldfield‘s “Tubular Bells”. It then slides into a nice dance groove. Another winner.

"Yoü and I " was produced by "Mutt" Lange and features Queen guitarist Brian May (with the classic “We Will Rock You“ riff). Gaga first presented this slower track back in June 2010 at Elton John’s White Tie and Tiara Ball. I am impressed with how well she rocks this one out. It is easily my second favorite track on the record.

"The Edge of Glory" is the third single. It is a very personal song as Lady Gaga wrote it shortly after the death of her grandfather in 2010. Rather than go the route of a slow, mournful song, Gaga delivers instead an up-beat celebration of life and beyond. Interesting choice. Clarence Clemmons (of Bruce Springsteen’s E. Street Band) provides the saxophone solo on the track, something I would not have expected in the middle of this electro-dance track.

When it comes to Gaga, I can clearly separate the marketing and theatrics (including the incredible costumes and stage settings) from the songs themselves. I understand the importance of these other elements and greatly appreciate them. Nevertheless, in the end, the music itself will or will not stand the test of time.

Therefore, just judging the music, I have to say that I enjoyed this record quite a bit. It appeals to my love of dance music, for which there is quite abundance. I would have liked to see Gaga change it up a little bit more, but I get that a dance-diva is what she primarily is so that is what the record primarily reflects. Maybe I will check out some of her earlier releases after this one.
Posted by Martin Maenza at 5:22 AM