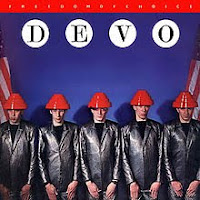 People tend to consider this band from Akron, Ohio, as an 80’s band but Devo actually got their start in the late 70’s. When the new decade ushered in, they greeted it with their third studio album Freedom of Choice. With this May 1980 release, the band moved to a more obvious synth sound, though guitars were played a big part too. The record did fairly well on the Billboard album charts, peaking at number 22 with a total run of fifty-one weeks. It also hit number 75 in Canada, number 47 in the UK, number 9 in New Zealand and number 5 in Australia. It also contains one of the band’s most well-known songs.


“Girl U Want” starts off the album. The song is about unreciprocated love/lust for a woman, and it was inspired by the Knack’s “My Sharona”. You can hear the way the guitars and synthesizers work in harmony on this one.

“It’s Not Right” opens with a very strong synth line. This is a classic new wave sound.

Of course, everyone knows “Whip It”, the only Devo song to break into the US Billboard Hot 100 (it went as high as number 14 and spent fifteen weeks total on the charts). The lead guitar riff is based on a riff from Roy Orbison’s “Oh, Pretty Woman”. The music video was very popular in the early days of MTV, complete with cowboys drinking beer, a cross-eyed young lady, and a woman having her clothes literally whipped off her by a man using a giant bullwhip. Ah, they just don’t make them like that any more.

“Snowball” has another great opening; I am a huge fan of cascading synthesizers. The analogy in this one is brilliant - of love out of control like a giant snowball. It was the B-side to the second single.

“Ton o’ Love” takes another interesting look at relationships. The guys really could have used some therapy, I think. But perhaps they would rather work things out through their music.

The side ends with the title track “Freedom of Choice”, my second favorite on the record. As the second single, it stalled at number 103 on the US Billboard singles chart. It has a nice, driving beat that is accompanied by strong guitars. The lyrics allude to the fact that Americans (and those from other “free countries”) have options open to them. We don’t live under political oppression that limits our activities and opportunities.

Side two opens up with “Gates of Steel”. The guitar line reminds me a little bit of the Sex Pistols and “God Save the Queen”. Again, I like the combination of the various instruments - it gives Devo their unique sound.

“Cold War” is up next. Its lyrics liken a relationship between a boy and girl to that of the Democratic and Communist nations. How very 80’s (and I mean that in a good way).

“Don’t You Know” follows. It experiments a lot with random synth sounds, making it sound right at home in the middle of an arcade. Man, that takes me back to hanging out downtown and dropping quarters to play “Mousetrap”, “Tempest” and “Centipede”.

“That’s Pep!” is very upbeat. What else would you expect from a song that has the word “pep” in the title? The guitar riffs are very catchy.

The record closes with “Planet Earth”. It is kind of fitting for them to sing about that, considering how they dressed and performed, many parents probably thought Devo were from another planet. They even add some synthesized voice to this one, giving it an alien sound.

My first exposure to Devo and some of the songs from this record came mostly from the local college radio station I listened to while still in high school. Like the Cars, they were bringing elements of the new wave into their rock and executed it very smoothly. When you hear one of these songs, you know it’s Devo. The songs on this album are good for filling out that new wave mix-tape (if you’re old school) or play-list (for the iPod generation).
Posted by Martin Maenza at 5:11 AM

Certainly their most popular album, with a lighter touch than most of their albums.

Incidentally, while Devo's major label recording career began in the late 1970s, the band itself can be traced to earlier times - philosophically, it can be traced to the Kent State shootings in 1970. I wrote about that here.

Thanks for sharing that link of the interview with Gerald Casale of Devo. Good reading.