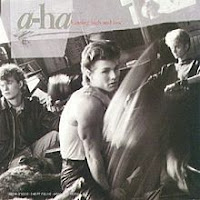 A Norwegian new wave band called a-ha made quite a splash on the music scene with their 1985 debut album Hunting High and Low. The group had formed a few years earlier, but their big break came thanks to an innovative video for the song “Take on Me” that ran constantly on MTV.

The album, which was released on June 1st of 1985, went to number 17 in Italy, number 15 on the US Billboard Album chart, number 12 in Canada, number 10 in Germany and Switzerland, number 7 in France, number 2 in the UK, and number 1 in Austria, Norway, New Zealand, and Sweden.


Side one opens with that big hit “Take on Me”. It spent twenty seven weeks on the US Billboard charts, reaching the number 1 spot by October. This first single also hit number 1 in Austria, Germany, Italy, Norway, Sweden, and Switzerland. I’ve always been a huge fan of the song, from the first time I heard it twenty six years ago. The synthesizer opening is pure 80’s classic, and the rising notes of the chorus are just amazing. How does lead singer Morten Harket hit them? Incredible!

“Train of Thought” was did well as a single in most of Europe (number 14 in Germany, number 8 in the UK and number 5 in Ireland), but not in the US. I like this one too - I like how it moves along at a good pace.

The title track is next. “Hunting High and Low” also did well as a single release in most markets (24 in Austria, 11 in Germany, 10 in Italy and Norway, 5 in the UK, and 4 in France and Ireland) but again not so the US. It is a nice ballad with a soothing tempo and soaring vocals. Now, the seagulls that appear briefly in the middle I am not so sure about. LOL.

“The Blue Sky” has a different syncopation to it that makes it interesting to listen to.

“Living A Boy’s Adventure Tale” closes the first side. Again, another nice synth-beat.

The album’s other US charting single, “The Sun Always Shines on T.V.” kicks off the second side. It spent eight weeks on the US charts, peaking at number 20 in early 1986. It also charted at number 11 in Italy, number 10 in France, number 8 in Austria, number 7 in Switzerland, number 5 in Germany, number 2 in Norway and Sweden, and number 1 in Ireland and the UK. I like the piano opening of this one - it immediately draws me in. I sing right along with that first verse. Then it explodes with the synthesizer part, full of amazing energy.

“And You Tell Me” slows things down a bit for a short track. The vocals are the focus here and they’re amazing. This was definitely a different sound than anything else on the charts at the time, which is why I think the album did very well. a-ha was doing their own thing.

“Love Is Reason” has a very danceable sound to it. It could easily be mixed in with some early Madonna or like music for a nice set. The same can be said about “I Dream Myself Alive”.

The final track is “Here I Stand and Face the Rain”. Even though it is my least favorite track on the record, it has a very pretty sound to it. I just don’t see myself seeking it out on its own or finding myself singing/humming it. It happens.

The album sold nearly two million copies in the US alone, where it reached number 15 on the album charts. It did about the same chart-wise in the rest of the world. In the UK it went to number 2, and in Sweden and their native Norway it reached number 1.

This album came out in between my sophomore and junior years of college; that summer I was working a six month co-op job in New Jersey. Having only a boom-box for my music listening pleasure, I bought this one on a cassette. I have to admit I bought it for the singles and tended to listen to mostly those and a couple other cherry-picked tracks. Only in recent years, with the iPod, have I started to listen to the whole album more fully.
Posted by Martin Maenza at 4:54 AM