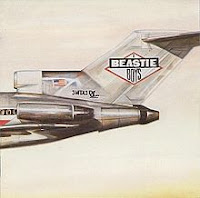 Starting out as a hardcore rock band in 1979, the New York City based trio who would become known the world over as the Beastie Boys eventually transitioned into the growing genre of hip-hop. DJ-producer Rick Rubin gets a lot of credit as well for his part in putting this debut together.
In 1986, they released their debut album Licensed To Ill which became the first album of the genre to reach number 1 on the Billboard album charts. It was also the record label’s fastest selling debut record, selling over 9 million copies.


Side one begins with “Rhymin’ & Stealin’”, with its pirate metaphor-filled lyrics hard-rocking samples (including a snippet of the Clash “I Fought the Law“). The opening volley across the starboard bow showed that the Beasties were not messing around. They came to make their mark on the scene. For me, this first track makes that point crystal clear.

“The New Style” was the second single from the album. The samples they pulled from the B-Boys, Trouble Funk and Run-D.M.C. helped make this one a dance club favorite. I think that was one of the keys to helping the band crossover to audiences of all colors. Another key was that the guys had a strong sense of the current street slang, and they used it copiously to further solidify their cred.

“She’s Crafty” samples from one of the greatest rock acts ever - Led Zeppelin and their song “The Ocean“. In my opinion, this was a brilliant move by the band. They provided those of-so-familiar hooks to get an instantaneous connection with the listener. That in turn made the listener more inclined to return to the tracks again quickly. That’s certainly how this album worked with me.

“Posse In Effect” name drops actor Abe Vigoda, most famous for playing Detective Fish on Barney Miller. How cool is that? For this TV fanatic, I thought it was.

I really like the ping-pong backing track to “Girls”, a story about a past relationship.

The side ends with their big hit single “(You Gotta) Fight for Your Right (to Party!)”. This fourth single was the biggest, breaking into the top 10 on the Billboard charts (number 7). This anthem was quickly adopted by the youth all over, voicing their own desires to live their lives on their own terms. This was a huge party and club favorite in 1986. Everybody I hung out with knew the song and loved it. The chorus was guaranteed to get the crowd chanting every time.

Side two opens with “No Sleep Till Brooklyn”, another hard-driving favorite where the guys talk about the experience of going from show to show on tour. Again, the chorus was designed for audience participation. The guitar riffs and solo were played by Kerry King of the band Slayer.

The third single was “Paul Revere”. It has a different sound to it, in part thanks to the backward drum samples with which they experimented.

“Hold It Now, Hit It” was the first single from the album. Just as the Beasties sampled many artists, years later others would sample from them. Both Eric B. & Rakim and Eazy-E have sampled some of the lines from this song in their own songs. What comes around goes around.

The final single from the album was “Brass Monkey”. The lyrics refer to an alcoholic drink of the same name. There are many recipes for it - beer and orange juice; a mixture of gin, triple sec, tequila, orange juice, sour mix and grapefruit juice; or a mixture of rum, vodka and orange juice. Personally, I think the first one sounds a bit gross, while the other two might be more palatable.

“Slow and Low” was originally a track that Run-D.M.C. had recorded for their second album but never used it. The Beasties only tweaked two of the lines on their version to make the song more personalized for them.

“Time to Get Ill” holds the record of samples for the album at twelve different sources (including Stevie Wonder, the Steve Miller Band, Creedence Clearwater Revival, Led Zeppelin, Barry White, AC/DC and two classic TV show themes - Green Acres and Mr. Ed ). They are all done, though, in such a way as to not be to obtrusive.

I got into this album and the Beastie Boys during the summer of 1985, when I was living and working in New Jersey. It very much reminds me of that period of time in my life, especially living so close to the Big Apple. I find that it was a nice evolution to the hip-hop genre which had been previously focusing on old disco and R&B beats. Like label-mates Run-D.M.C., the Beasties recognized the wealth of sounds that classic rock could provide. Together, both groups helped transform the genre to something that could reach an even larger audience.
Posted by Martin Maenza at 5:20 AM