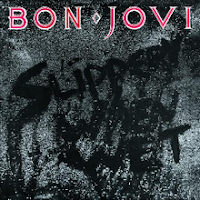 In 1986, the New Jersey born rockers of Bon Jovi released their third studio album. It was a best-seller record (over 12 million copies in the US and 28 million worldwide). It spent eight weeks at the number one spot and 38 weeks in the top five on the Billboard album charts; it was also the top selling album of 1987.


Side one opens with a long guitar chord and an organ solo, letting us know that the album and “Let It Rock” will be like a religious experience. We’re seeing a new day dawning for the band. This rock anthem has a customary a sing-along chorus.

The first single from the album, “You Give Love a Bad Name”, was also the first Billboard number 1 for the group. It starts with the unaccompanied opening line, which I like a lot. That line showed up in a first season episode of How I Met Your Mother with this song being the opener of Barney Stintson’s “Get Psyched” mix. It certainly does that. This one was a huge hit in the bars well into 1988 - I remember it was a big part of our nights out partying.

“Livin’ on a Prayer” was the third single and the second Billboard number 1 from the album. It knocked out Madonna’s “Open Your Heart” and spent four weeks at the top until Huey Lewis and the News reached the top with “Jacob’s Ladder”. The lyrics tell the story of Tommy and Gina, a working-class couple trying to keep their lives and their love together. This song is a classic and is one of the tracks that made it into the Rock Band video games. I really love singing this one when my son and I play; and I have to give props to Jon since some of the notes are tough to hit (for me at least). I also love the sounds that the guys get out of the guitars on this one.

“Social Disease” opens with an orgasm, and the music follows suit. The lyrics though stay pretty tame (PG-13 at best).

“Wanted Dead or Alive” was the second single. It spent twelve weeks on the Billboard chart, topping out at number 7. Jon Bon Jovi was a big fan of Old West heroes, so this song was his tribute to them. The opening guitar summons up the image of tumbleweed rolling through a dusty ghost-town.

Side two thunders out of the gate with “Raise Your Hands”. They then slow things down a little with “Without Love”. These two are my least favorite tracks on the record, mostly because they are the ones I listen to the least. Both are still very good songs.

I like the piano/guitar opening on “I’d Die for You”. The lyrics draw parallels to the classic love of Romeo and Juliet.

The fourth single was “Never Say Goodbye”. While this love ballad failed to pierce the Billboard Hot 100, it reached 11 on the Mainstream rock charts and number 21 in the UK. The lyrics tell the tale of two young lovers and their need to stay together. This one was a slow-dance favorite in the years after this album came out. It was perfect for that end of the night swaying of sweaty bodies, each hoping for a kiss or two before the final notes of the song faded.

The album ends with the band getting “Wild in the Streets”, one final up-tempo number. For me, the song summons up comparisons to another Jersey rocker. I think the Bon Jovi boys hold their own fairly well.

While this record came out during my final year or so of college, I really didn’t get into anything beyond the hit singles until I was living in my first post-college apartment in 1988. One of my neighbors was a huge fan and had the record. We’d listen to it a lot, especially if we were hanging out rather than going out for the evening. I like the record a lot and have all the tracks in my iTunes library. Nearly twenty five years later, it still holds up fairly well.
Posted by Martin Maenza at 5:20 AM