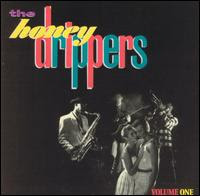 In the early 1980‘s, lead singer Robert Plant took breaks from his hard rocking for the legendary band Led Zeppelin to play some more classic rhythm and blues music in a group called the Honeydrippers. The band included fellow Zeppelin guitarist Jimmy Page, former Yardbird member Jeff Beck and some other musicians.


On September 24th of 1984, the Honeydrippers released their one and only EP. They got a little bit of help from Nile Rodgers on guitar (he also co-produced the record), and Paul Shaffer on keyboards. The album sold very well, reaching number 67 on the US Billboard R&B chart, number 56 in the UK, number 44 in Sweden, number 40 in Germany, number 4 on the US Billboard Album chart, and number 1 in Canada. Two of the five tracks were also released on a single, with the B-side becoming more popular than the A-side (more in a bit).

Side one starts with “I Get a Thrill”. Robert Plant's voice is complimented by the swing of the music and the doowop backing vocals.

Next up is “Sea of Love”, a cover of the 1959 R&B number 1 hit by Phil Phillips. The version on this album was actually the B-side to the "Rockin' At Midnight" single, and it proved to be more popular by the listeners that the DJs ended up flipping the record. It ended up going to number 56 in the UK, number 48 in Germany, number 29 in Ireland, number 25 in the Netherlands and Switzerland, number 3 on the US Billboard Hot 100 and number 1 in Canada. The opening is beautifully orchestrated. The rest of the song made for a perfect slow dance candidate; it was a favorite during my sophomore year of college when the song was rising through the charts.

“I Got a Woman” was originally recorded by Ray Charles in 1954. It has a nice upbeat tempo thanks to Shaffer's keyboards. I like the saxophone, a signature instrument in early rock and roll, on this one too.

Side two opens with “Young Boy Blues”, first recorded by Ben E. King in 1964. This is another slow-swayer, allowing Plant plenty of leeway to croon.

“Rockin’ At Midnight” is a renamed cover of the 1947 Roy Brown tune “Good Rocking Tonight” which was most famously recorded by Elvis Presley in 1954. This version went to number 25 on the US Billboard Hot 100, number 24 on the US Billboard Dance chart, number 18 in Canada, and number 8 on the US Mainstream Rock chart. The song fully embraced the swing sound that was already making a comeback thanks to bands like the Stray Cats and others. When this one came on, everybody hurried to the floor to dance.

I really like the sound of the songs on the Honeydrippers Volume 1. I would have loved it they had produced a full-length album instead of just an EP, but that wasn't meant to be. Still, it is a fun record and definitely a blast from the past (the 80's) that is in itself a blast from the past (paying homage to th 50's).
Posted by Martin Maenza at 6:17 AM