Who's That Girl (soundtrack) 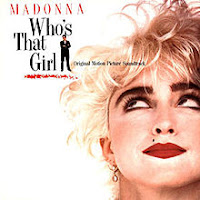 In the summer of 1987, Warner Brothers studio released a romantic comedy starring Madonna and Griffin Dunne. She played street-smart Nikki Finn who went to jail for a murder she didn’t commit. She meets a lawyer named Louden Trott (played by Dunne), and convinces him to help her clear her name. Sound like a must-see story? Neither the critics or the ticket buying public thought so. The film tanked.


The soundtrack, however, was a different matter entirely. Yes, the critics dismissed it, but the fans liked it (pushing it into the top 10 of the album charts in many countries including the US and UK). A number of the tracks were released as singles that did very well, and the album over all sold six million copies worldwide. For me, personally, I never saw the film but I did have this record on vinyl. I was a huge fan of Madonna’s in the 80’s and snapped up any music of hers that I could.

The first side kicks off with a trio of Madonna tracks, fitting since she was the star of the film and her face appears on the front of the album. She shares writing credits for all four of her songs on this album.

“Who’s That Girl” was the first single from the album. It debuted on the Billboard charts at number 43, took seven weeks to rise to number 1, spent a week there before spending another eight weeks on the charts. The song has a nice Latin flavor to it - from the rhythm of the drums to some of the lyrics in Spanish. The song always moves me to a back and forth swaying.

The second single from the album was “Causing a Commotion”. It went all the way to number 2 on the Billboard charts, stopped by Michael Jackson’s “Bad” for two weeks and then Tiffany’s “I Think We’re Alone Now”. The lyrics are Madonna’s response to the troubles in her then marriage with Sean Penn, who had an abusive and violent streak in him. The music has a funky baseline and is very up-tempo, turning a bad situation into a very solid dance track. It is my favorite of the Madonna songs on this album.

“The Look of Love” was the third and final single. The song did well world-wide but failed to crack the top 40 in the US. The track is a bit slower with a more moody feel to it.

Duncan Faure is next with “24 Hours”. He was born in South Africa and a former member of the Bay City Rollers. This song is a straight-forward pop song with a dance beat. It is pleasant enough and a nice song to drop into a play list if you’re looking for some under exposed songs.

Club Nouveau gives us “Step By Step”. The band was riding a popular wave after their debut album Life, Love and Pain (also on the Warner Brothers label) the year before. This track has a similar funky sound with a steady drum beat and strong horn section. Fans of this group should seek this one out; I guarantee you’ll love it.

Side two opens with “Turn It Up” by New Jersey born singer/songwriter Michael Davidson. The track, with its synthesizer and drum-machine beats, became a huge international dance hit. Again, another lost 80’s dance gem that deserves to shine every now and again.

Scritti Politti provides the “Best Thing Ever”, which also was released on their 1988 album Provision. The song continues in the same vein of their dance-synth music from their Cupid and Psyche ‘85 album. While the song is simple in its composition and lyrics, it is also very pleasant. A good filler track.

Madonna returns for one more tune - “Can’t Stop”. It is very typical of tracks from Madonna’s True Blue album from this period; the beat is very danceable and the lyrics are empowering. I like the synth hooks on this one.

Coati Mundi rounds out the album with “El Coco Loco (So So Bad)”. Born Andy Hernandez, this vibraphone player was a member of Kid Creole and the Coconuts before heading out solo. He also has a small part in this film as well in a number of Spike Lee films. His Puerto Rican roots show in this song, from the amazing Latin rhythms to the Spanish lyrics. I really like how this one moves. It is a fun song.

This record came out during my final year of college, the last summer I was in Rochester. After classes during the day, I was spending a lot of weekend evenings out at the clubs. A number of these tracks were part of the music sets during those nights. Listening to this record again today, almost 24 years later, I’m taken back to those good times. Good stuff.
Posted by Martin Maenza at 9:25 AM