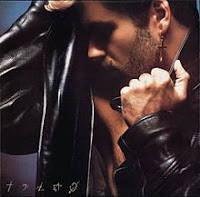 With their third and final album Music From the Edge of Heaven, the writing was already on the wall that things with Wham! were changing. Two of the singles from that record were even presented as solo vehicles for George Michael. The band soon broke up, allowing George Michael to work on much more mature songs.

In late 1987 he put out his first solo album Faith, a chart topping and award winning record. It sold over 1 million copies in its debut week on the charts and over 25 million worldwide since. It went to number 1 on the UK and US album charts; it also went to number 1 on the Billboard R&B charts, a first for a Caucasian artist. It spawned six chart topping hit singles, won a Grammy for Album of the Year in 1989, and earned George three American Music Awards that same year. Rolling Stone magazine ranked Faith at number 84 on its 100 Top Albums of the 1980's list and number 480 on its 500 Greatest Albums of All-Time list.


Side one opens with the title track "Faith". This second single went to number 2 in the UK and was George's first solo number 1 in the US. The music video is an iconic one, with George (in his jeans, sunglasses, leather jacket and signature face stubble) leaning against a jukebox. The opening organ melody followed by guitar riff is instantly recognizable and always gets my toes tapping. The lyrics speak of a cautious moment in a relationship and having the faith in the decision to be made about it. I really like the rockabilly feel this one has.

"Father Figure" was the third track released as a single (number 11 in the UK and number 1 in the US). In a lot of ways, it reminds me of "A Different Corner" from the final Wham! album - it has similar musical elements. The vocals are very raw and exposed; George really sells the slow, sensual seduction. The chorus has a slight gospel feel to it as well. It all meshes nicely.

The first single was "I Want Your Sex", which went to number 3 in the UK and number 2 in the US (it was denied the number 1 spot by U2's "I Still Haven't Found What I'm Looking For"). It did very well despite a lot of censorship on the part of radio stations (they often would only play it in the later evening hours due to the song's subject matter). Indeed the song is sexually charged, but the message of monogamy is a strong one too ("sex is best when it's one on one"). The album track is a full nine minute work out, complete with extended percussion and brass solos. This was a hugely popular dance track back in the day, one guaranteed to get the floor packed and to throw everyone's libido into overdrive. It is definitely my favorite track from the album.

"One More Try" was the fourth single released (number 8 in the UK, another number 1 in the US). This ballad tells the story of reluctance to enter a new relationship based on previous bad experiences. I really like the combination of the organ and the slow rhythm on this one; together they set the mood perfectly.

Side two begins with "Hard Day", a dance club favorite in late 1987 and early 1988. The rhythm on this one is very funky and features a lot of cuts/scratches to the music. This is clearly my favorite of the non-single tracks, one that in my opinion deserves a lot more recognition. Next time you're throwing an 80's party, I'd recommend it for a dance mix.

"Hand to Mouth" takes a departure from the previous tracks in that it focuses on more serious issues - two stories of two Americans struggling with day to day existence. One is a man who can't take it any more and shoots at people out of frustration. The other is a story of a single mother who turns to prostitution to make ends meet. This is another example of the mature lyrics that George felt he couldn't do as part of Wham!

"Look at Your Hands" tells the story of a man trying to seduce an unhappily married woman. This one has a catchy rhythm and chorus hook to it.

"Monkey" was the fifth single released and the fourth consecutive number 1 single for George in the US (it only reached 13 in the UK). The lyrics use the symbol of a "monkey on your back" to represent addiction, in this case an addictive relationship. This too was another popular song in the clubs in 1988; its funky beat was made for dancing to.

"Kissing a Fool" was the last single; it peaked at number 18 in the UK and number 5 in the US. This ballad has a jazz feel to it thanks to the piano, horns and softly played drums. It is very personal song in that it reflects George's own fears that he cannot be a good partner due to the personal baggage he brings to the table.

Faith came out during the final months of my senior year of college, a time where I had a fairly light classload and was spending a lot of time clubbing and sending out resumes. I bought a copy of it on cassette and played it a ton over the following year. Even today, almost a quarter of a century later, this album remains one of my favorites from those years. The nine tracks are a solid collection of music and really showcase George Michael's talents as a singer and songwriter. I consider it an essential record in the collection of any fan of 80's pop or dance music.
Posted by Martin Maenza at 5:25 AM