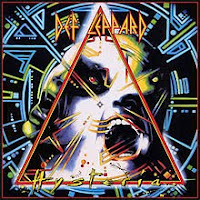 After their 1983 release Pyromania, Def Leppard faced a number of challenges with the biggest being drummer Rick Allen's loss of an arm in a car accident in December of 1984. After a number of false starts, they locked in producer "Mutt" Lange and were able to release their fourth studio album in 1987. Hysteria was a commercial success - scoring the number 1 spot on the Billboard and UK album charts, generating seven singles, and selling over 20 million copies worldwide. The album was also ranked as number 472 on the Rolling Stone list of 500 Greatest Albums of All-Time.


"Women", with those powerful guitar chords at the start, opens side one. This first single only reached number 80 on the Billboard Hot 100 singles chart. I really can see why - while it is a good, rocking song, its hooks aren’t as catchy as the other songs.

"Rocket" was the last single from the record, reaching number 15 on both the US and UK charts. This song definitely kicks the game up a notch. I think the record might have been even better to start off with this one, with the launch pad audio and all. Perfect for the take-off of the record.

"Animal" was the second single, and the first top 10 hit in their native UK (it reached number 6). It only reached number 19 on the US Billboard charts. The chorus on this one is very catchy, perfect for that audience sing-along during the concert.

The power ballad "Love Bites" was the fifth single from the record, and the only song to date by the band to score the number 1 spot on the Billboard charts. The opening is a classic - everyone used to imitate it back in the day. It was also a slow dance favorite in the more rocking bars back in the day.

Peaking at number 2 on the Billboard charts, "Pour Some Sugar on Me" was the fourth single. This was our jam back in 1988, a guaranteed party track that everyone loved to dance to. I can recall many a night when it was part of the DJ sets (it was most likely every night for awhile there). This innuendo laden tune is my favorite from this album; it is easily a five-star track on my iPod.

"Armageddon It" was the sixth single released in the US (it was not released as a single in other markets), and it peaked at number 3 on the Billboard charts. It goes hand in hand with the previous track for a one-two rocking double-shot.

Side two starts out with the very political "Gods of War". The song features audio clips of both British Prime Minister Margaret Thatcher and US President Ronald Reagan. The special effects at the end sound very cool, especially with the headphones on.

This slow down a little with the next track. As the third single, "Hysteria" peaked at number 10 on the Billboard charts. It is an interesting adjective to use to describe the feeling of being in love. For me, the word has negative connotations - panic, uncontrolled laughter. But I see how they were going for extreme emotion. Still, great song and cool guitar effects.

The vocal effects at the front of "Excitable" are a mixed bag. But then the song starts and it’s all good. This deep-track has some nice hooks in both the music and the chorus, enough to get it into your head. Rick Allen’s steady beats keep this one pounding too.

"Love and Affection" closes out the album. The song is good, but I think it is outclassed by so many fantastic songs before it.

Hysteria was another one of those albums I really got into post-college in 1988. It is really hard to beat that first side as five of the six songs are instantly known classics by the band. One of the guys that lived in the same apartment complex was a huge fan, so we listened to it quite often. When Def Leppard came through Chapel Hill on the tour later that year, Jeff and I went to the show; it was an awesome concert as the band is even more amazing live than they are on record (and this album shows their pretty amazing in the studio).
Posted by Martin Maenza at 12:23 PM