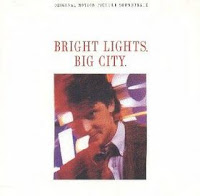 In 1988, Michael J. Fox took the lead role in the adaptation of a Jay McInerney novel Bright Lights, Big City. Fox played a New York City magazine fact-checker with a cocaine habit that was slowly ruining his life. This very engaging drama also starred Phoebe Cates as the ex-wife and Kiefer Sutherland as the enabling best friend. The film is pretty good and the novel is a great read.

The soundtrack album that accompanied the film has a rather interesting mix to it. The contributions range from big name acts to some much lesser known ones. I think the end result is a good one.


“Good Love”, a funky groove by the Minneapolis music-master Prince, starts things off. The track was originally slated for his 1986 album called Crystal Ball, but the project never got into production. Warner Brothers then requested it for this album. The song has a nice party feel to it, perfect for the film. Prince sings in his “Camille” voice, and the song includes synthesized dog-barking sounds. As a huge fan, the inclusion of this track alone was enough to get me to buy the album - but it is just the icing atop a sweet musical treat.

New Order is next with “True Faith”, a track that first appeared on their 1987 album Substance. As the band was well into their synth-dance phase by this point, this song has a perfect club sound. It has also appeared in a number of films and TV episodes over the years.

Narada is the stage name for Michael Walden, an American producer, drummer, singer and songwriter. “Divine Emotions” was one of the last singles he released, but what a way to go out - with a number one Billboard Dance Club chart track. I think is one of those rare musical gems that few people know about.

“Kiss And Tell” was first released in 1987 on Bryan Ferry’s Bête Noire album. Thanks to the film, the song went to number 31 on the US Billboard charts. Ferry’s voice is as charming as always on this one.

The side ends with a remix of Depeche Mode’s “Pleasure, Little Treasure”. The song has an urgency to it which perfectly mirrors the addiction of the characters in the film and what the constant need for drugs does to an individual caught in their grip.

Side two opens with Donald Fagen’s original track “Century’s End”. The main synth-line is supported by a jazzy swing of horns. I like the cool feel that it has.

The Noise Club lays down “Obsessed”, a funky dance track. They remind me a lot of the Wild Pair who did a duet with Paula Abdul (under the guise of MC Skat Kat) on the song “Opposites Attract”. The two groups have a very similar sound to them, but the Noise Club also knows how to bring a little hard guitar to the party as well.

Konk was a band out of New York City that combined new wave and disco, along with a whole lot of attitude. They originally released “Love Attack” as a twelve-inch single in 1986. This song has a nice Afro-beat to it.

“Ice Cream Days” by Jennifer Hall is the record’s sole “ballad”. It is certainly the slowest tempo of the ten. With its ethereal quality, it is a nice change of pace by this point in the record.

The record ends on a high note with M/A/R/R/S and their big dance club hit “Pump up the Volume”. With their electro-funk style, the two pairs of brothers that hailed from England “b-b-b-boogied-down” all the way up the Billboard charts to number thirteen. This song could be heard everywhere in the later part of 1987 and early 1988; the quirky video played constantly on MTV as well. I probably danced to this one a couple dozen times easily out in the clubs in 1988. This song is definitely my overall favorite from the album. When you throw it on, make sure you do pump up the volume to get the full effect of the pounding bass.

I owned Bright Lights, Big City on vinyl; it was one of the last dozen or so albums I bought in that format. When my turntable gave up the ghost and I was transitioning into CDs a few years later, this was one of those records I picked up right away. Something about the dance-mix really speaks to me. It reminds me a lot of my first year post-college when I was going out a few nights a week with friends from the apartment complex.
Posted by Martin Maenza at 8:39 AM