The Smiths - The Queen Is Dead 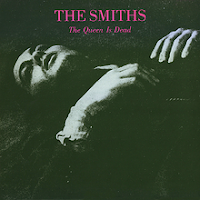 In June of 1986, the Smiths released their third studio album The Queen Is Dead. The album was certified Gold in both the UK (where it reached number 2) and the US (where it only reached number 70 on the Billboard Album chart). The record appears on Rolling Stone magazines 500 Greatest Albums of All Time list at number 216.


Side one opens with the title track. “The Queen Is Dead” has a darker sound to it musically which I find quite interesting. The lyrics take to task the Royal Family and the monarchy.

“Frankly, Mr. Shankly” is quite a bit lighter musically. It has a rather jaunty little rhythm to it that bounces along easily. The lyrics tell of a conversation with someone in power, perhaps a backer of an artistic endeavor. In the end, they don’t care what he thinks - they just want his money.

The tempo slows down considerably with “I Know It’s Over”. All the elements - music and vocals - work well for me on this track. The song speaks of a love that has failed to be, and the singer likens that failure to death with a burial.

“Never Had No One Ever” is a song of desperation and loneliness. The comparison to a stalker relates to looking in at someone else’s life from the outside, longing for what they have. It is very broody.

Morrissey used “Cemetery Gates” as a response to those who were critical of his use of his favorite authors for the lyrics of some of his songs. I really like the up-tempo melody on this one.

Sides two begins with the second single “Bigmouth Strikes Again”. The lyrics tell about a person who, after commenting on others, ends up telling those who ask him about the comments that he was only joking. I really like the guitar work on this on by Johnny Marr and Andy Rourke.

The first single from the album was “The Boy With the Thorn in His Side”. This is a self-reflective song by Morrissey where he represents “the boy” and the music industry and all those who never believed in him are “the thorn”. For me, the title summons up the image of Jesus on the cross for some reason. He too had those who were not believers in him. Coincidence? I don’t think so.

“Vicar in a Tutu” has a nice rocking sound in a sort of classic 50’s way. The subject matter of the lyrics is interesting; to me it is a commentary of sorts on the church and how very often people hide their secrets behind a religious veil.

“There Is a Light That Never Goes Out” is one of the songs that most interests me on this record. I think it is because of the chorus - “if a double-decker bus crashes into us… ”. It is a very descriptive imagery, very specific and a little on the optimistic morbid side.

“Some Girls Are Bigger Than Others” closes the album. Again, beautiful music by the band. The lyrics are a little repetitive but the message seems to be that not every woman is the same. Each must be judged on their own merits and individuality.

Overall, I prefer The Queen Is Dead over the Smiths previous one, Meat Is Murder. I definitely feel the music and vocals have a much better synergy on this record.
Posted by Martin Maenza at 6:17 AM

Thanks. I'll have to check that one out.