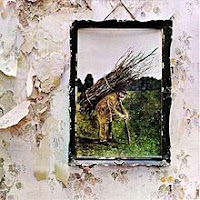 When Led Zeppelin put out their fourth studio album in late 1971, there was no title printed on the front. So, everyone followed the naming convention from the first three records and called it Led Zeppelin IV.

This record was a huge seller, one of the best albums worldwide (over 32 million copies, 23 million of which were sold in the US alone). It went to number 1 on the UK Album and Canadian PRM 100 charts, number 2 on the US Billboard 200, the French Album, the Japanese Album and the Australian Album charts.

“Black Dog” starts off the first side. This first single did very well on the charts, peaking at number 15. The song opens with Robert Plant’s vocals, followed by Jimmy Page and John Paul Jones on guitar and John Bonham’s pounding drums. This song has a classic Zeppelin riff that everyone who is into classic rock and roll knows by heart. The lyrics are about a man’s desire to win a woman’s love.

“Rock and Roll” was the second single from the album; it fell short of the top 40 when it peaked at number 47. The song pays homage to the classic rock music of the 50’s and 60’s. It also has a nice blues feel to it, even with such a driving tempo from the guitars and drums.

“The Battle of Evermore” shows off Led Zeppelin’s folk side. It features Jimmy Page on mandolin and John Paul Jones on acoustic guitar. The lyrics make references to J.R.R. Tolkien’s the Lord of the Rings. I like how it shows a different aspect of the band.

The eight-minute long epic “Stairway to Heaven” rounds out side one. It starts with an acoustic folk feel and builds up to a hard rock conclusion. It is often considered one of the greatest rock songs of all-time; it was certainly one of the most requested songs on album-rock radio stations (and not just because it gave the disk jockeys time to have a quick smoke or use the bathroom). Every school dance in the 80’s ended with this song and most of the local bars in my hometown I went to in the mid-to-late 80’s always closed the night with this song for a slow dance. This definitely my favorite track from the album.

And to quote "Mike Damone" from Fast Times at Ridgemont High: "When it comes down to making out, whenever possible, put on side one of Led Zeppelin IV."

Side two opens with “Misty Mountain Hop”, the B-side to the “Black Dog” single. This medium tempo track has a memorable hook to it that reels you in. The Misty Mountains is another reference to Tolkien’s Middle-Earth setting for his novels, clearly a favorite of writers Page and Plant.

“Four Sticks” was the B-side to the “Rock and Roll” single. The title refers to the fact that Bonham played with two sets of drumsticks for this song. It has a nice improvisational feel to it.

The folk sound returns with “Going to California”. The lyrics reportedly give reference to singer Joni Mitchell, with whom Page and Plant were both smitten. I like the easy-going feeling to this one and how the music just meanders along like a cross-country highway.

“When the Levee Breaks”, at an equally impressive seven minutes long, closes out the record. Originally this blues song was record in 1929 and is about the great Mississippi flood of 1927. The band took that song as an inspiration and tweaked it some. The band also did a lot of experimentation with instruments and tempos in the studio on this one to achieve the unique sound. I think it turned out pretty cool.

My older brother had this one on vinyl, so I heard all of these songs very often through the wall between our two bedrooms. When I would spend time listening to the local rock radio stations during my high school, college and post college years, it was a sure thing that most of these songs would show up in the rotations. I agree with the critics - I’d definitely put this one in the top contenders for best all-time rock album. It is a classic in every sense of the word.
Posted by Martin Maenza at 9:36 AM