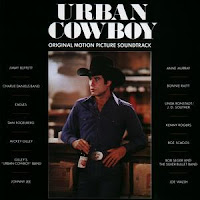 After taking a spin in the disco and a nostalgic trip to the 50's, John Travolta donned a Stetson hat, a big belt and leather boots for 1980's Urban Cowboy. As Bud, he worked at an oil refinery by day and spent his nights at Gilley's honky-tonk. There he danced and fell in love with a cowgirl named Sissy (played by Debra Winger). There were bar fights and some mechanical bull riding too. Oh, and some amazing music which was released on a double-disk soundtrack record.


Side one opens with Jimmy Buffet and "Hello Texas". Jimmy’s roots started out in country but he managed to mix in a good bit of pop-rock into his music over the years. This one is more along those lines. This one has a nice tempo right out of the gate, starting things off right.

Joe Walsh continues the rocking with "All Night Long", a song that spent sixteen weeks on the US Billboard Hot 100 and peaked at number 19. I have fond memories of hearing this one on the radio all through the early 80’s, usually cranked from someone’s car stereo as they drove by with the windows down. It is a solid rocker with memorable guitar work and the hand-clap-chant at the end.

Dan Fogelberg’s "Times Like These" continues that harder edge, which is a surprise coming from a noted soft-rock singer like him. I find the track okay, not bad but nothing superior either. Good middle of the road music.

Bob Seger and the Silver Bullet Band are next with "Nine Tonight". Seger would use the same title for his 1981 live album. Again, this is another artist not known for country and this track clearly isn’t either. It has all the signature rock sounds that made this Detroit rocker famous. Good song.

Side two starts with "Stand by Me" by Mickey Gilley. This country cover of the 1961 Ben E. King hit reached number 1 on the Hot Country Singles chart and number 22 on the Billboard Hot 100. Finally someone is giving us the “cowboy” in the title as clearly side one had quite a bit of “urban” to it.

Johnny Lee and "Cherokee Fiddle" are next. This too is classic country for me - steel guitar, fiddles, country twang. I like it a lot.

Anne Murray with “Could I Have This Dance” is next. It went to number 1 on the Billboard Country Single charts and number 33 on the Billboard Hot 100 chart. I have always loved this Canadian country gal - beautiful voice and beautiful songs. Her music was an AM radio staple in the 70’s.

The Eagles' "Lyin' Eyes" first appeared on their 1975 album One of These Nights. In the film, it can be heard in the background of a diner scene. I love this song - always have. This classic album-rock track tells a great story albeit a sad one about infidelity. The vocal harmonies have me singing along every time. This is a five-star song on my iPod.

The third side begins with "Lookin' For Love" by Johnny Lee. This song too went to number 1 on the Billboard Country Single charts as well as number 5 on the Billboard Hot 100. This is another one of those sing-along songs for me, particularly on the chorus. I know I probably heard the song a hundred times over the summer and fall after the film came out (it was another one of those songs that was everywhere).

Bonnie Raitt’s first offering is "Don't It Make You Want to Dance". This California country singer has a nice bluesy tenor to her voice, but man can she pack in the power too. I like the rhythm on this one a lot - good to dance too.

In the film, the Charlie Daniels Band played their 1979 hit "The Devil Went Down to Georgia"; it went to number 3 on the US Billboard Hot 100 . They were definitely riding on a wave of popularity with this crossover song. Hearing it again just takes me back to my childhood. I remember how much it was played everywhere at the time. Of course, it was the “son of a gun” version (because back then you couldn’t say “b*tch” on the airwaves -my how times have changed, and not for the better).

Mickey Gilly returns with "Here Comes the Hurt Again", another slow tempo track. His voice seems really suited for that, based on his two contributions to this album. Definitely a cry-in-the-beer song. Someone pour me another draft, please.

Gilley's "Urban Cowboy" Band closes this side with "Orange Blossom Special / Hoedown". The first part is a classic country fiddle tune written back in 1939. The later is an American square dance standard. The two parts flow together quite seamlessly, making for a pleasant instrumental interlude.

Kenny Rogers kicks off the fourth side with "Love the World Away", the second single from the album. It made the top 10 on the country charts (number 4) and the top 20 on the US Billboard Hot 100(number 14). I was a big fan of his music as well - that warm, rich vocal sound from the man with the big bushy beard. This was a slow dance favorite with the perfect music to sway to and lyrics that facilitated an end-of-the-dance kiss.

Charlie Daniels Band returns with "Falling in Love for the Night". The song has a little bit of a south-of-the-border swing to it.

Bonnie Raitt makes a second appearance with "Darlin'", a little bit slower of an offering. I really like how her voice rings in perfect harmony with the steel guitar.

Boz Scaggs and "Look What You've Done to Me" did well on the pop charts, reaching number 14 before 1980 came to an end. That piano opening pulls me right in. If the first side of the record was for rocking line dancing, this side was made for slow dancing. This is another classic from that year.

The record closes with Linda Ronstadt and J.D. Souther "Hearts Against the Wind". Their two voices blend so well together on this song.

The album went to number 1 on the US Billboard Country albums chart (first for an entire month of August, then again for a week late in September) and number 3 on the overall US Billboard Album chart. The film and the soundtrack have been credited to kick starting a new period of popular country music in the United States. It certainly helped to grow the popularity of line-dancing and country attire. After Urban Cowboy I recall seeing a more country-in-the-city style of dress where people went to dance.

I did not listen to a lot of country music during my high school years, the time this film and soundtrack came out. However, as noted, a number of the songs crossed over into the Top 40 charts so I was very familiar with those tracks. That is one thing I always liked growing up in the 70's and early 80's - the fact that there was such a variety on the music charts. It created a much diversified public consciousness. You'd hear these songs side by side with rock, pure pop, R&B, new wave, the just forming rap - on the radio or TV shows like Solid Gold. I really think that helped me to appreciate all forms of music more. Today, I can really enjoy the variety in offerings on this record.
Posted by Martin Maenza at 12:37 AM