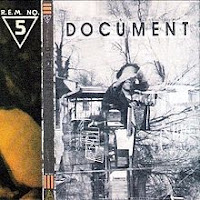 The American alternative rock band R.E.M. released Document, their fifth studio album, in 1987. The addition of Scott Litt as co-producer also marked a change in direction as the songs musically shifted a bit more towards the mainstream. This album featured the band's first top 10 Billboard hit and the album was their first platinum seller. Rolling Stone magazine ranked the album at 41 on its 100 Greatest Albums of the 1980's list and number 470 on its 500 Greatest Albums of All-Time list.

Okay, if you’ll recall last time that I reviewed an album by R.E.M. I confessed that they lost me a lot on the lyrics. I’m actually pulling them up to follow along and will attempt to offer what I think they mean (I’m prepared to be totally off-base on a lot of them).


Side one begins with "Finest Worksong", the third single from the record. While it failed to make it into the Billboard 200, it reached number 28 on the Mainstream Rock charts. I hear it at least once a week on Sirius/XM 1st Wave channel (clearly a favorite of the DJs). The lyrics mention Thoreau who was known of his writings on civil disobedience. It also reiterates the points of taking control and blowing your horn, so I guess perhaps we’re talking about taking pride in one’s work and destiny.

"Welcome to the Occupation" appears to be a song describing some kind of civil unrest. There isn’t a particular reference in there that helps me pinpoint a specific historical time or moment; the lyrics tend to be very broad and general.

"Exhuming McCarthy" is a political song that compares the communist-hunts of Joseph McCarthy in the 1950's to America's exceptionalism of the Reagan years in the 1980's. I really like the typewriter sound that opens the track. Man, I miss my old manual typewriter I had back in the late 70’s.

"Disturbance at the Heron House" is another odd one. The lyrics seem to imply some kind of chaotic mob storming a location. Heron House is an easement of protected natural land in Washington State. I’m not sure how they’re connected - if they even are. On the other side, this is another great sounding song musically. If Michael Stipe is going to keep me in confusion, the music by the others is at least putting me at ease.

"Strange" is a cover of a song by a band Wire, from their 1977 album Pink Flag. This song definitely has a more punk-like feel to it, a nice change of pace. The lyrics seem pretty straightforward; they have a feel of nervous paranoia to them. The music reflects those emotions as well.

"It's the End of the World as We Know It (And I Feel Fine)", the second single, is full of references to the apocalypse as found in various cultures. The lyrics come at a rapid-fire rate, making it quite a challenge for the average listener to be able to master. Most of us just give up, except for a few phrases here and there, and go straight to the chorus (I know I do). The song only got to number 69 on the Billboard charts but it went to number 16 on the Mainstream Rock charts. It has been covered by a number of artists over the decades and has been used in a number of TV and films. Here are my two "geek" references: one appears in issue 2 of DC Comics' 1996 The Final Night mini series and the other was the use of the song in the 1998 first season episode "Hurricane" of Dawson's Creek.

Side two goes out to "The One I Love", the album's first single that peaked at number 9 on the Billboard charts. At first blush, one might dismiss this as a simple love song dedicated to that special someone. However, it is really more about the illusion of love, a justification of two people using one another over and over again. I really like music on this one - definitely my favorite song on the record.

"Fireplace" is an odd song though it has a recognizable structure (ABABBB) of lyrics. Though I have no clue what the lyrics are about. I do love the saxophone on this one; it really adds to a great musical composition.

The music of "Lightnin' Hopkins" is very energetic. As for the lyrics, again I am lost.

"King of Birds" features a mandolin. I like that R.E.M. experimented with new sounds on this record.

The guitars on "Oddfellows Local 151" have a sharp edge to them. They set a nice mood for the song. The lyrics of this one paint a picture I can certainly visualize with some clarity (a drunken man ranting in a back alleyway to whoever will listen).

In the year or so after the release of Document, I was certainly familiar with the three singles. The other eight songs might show up occasional on the album-rock stations when I'd listen to it. It wasn't until after I got married in 1990 that my wife Terri introduced me to a lot of the R.E.M. discography (her musical tastes being a bit different from my own). That education included the picking up of the band's albums as part of our quickly growing CD collection. Today, I have come to appreciate their albums as a whole, exploring the deep tracks as the albums come up on my iPod shuffles and through research for my blog.

Now, if I could just figure out what some of these songs are about…
Posted by Martin Maenza at 5:29 AM

Thanks, Chris. I appreciate you reading.