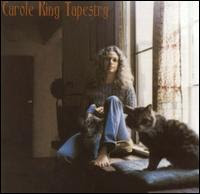 1971 began with the release of Carole King’s landmark album Tapestry (on February 10th of that year). Through out the 60’s, she had worked as a songwriter, penning tunes for other artists to turn into hits. She decided in the 70’s to start recording her songs herself; this would be her second studio release.


Tapestry held the number one spot on the US charts for fifteen consecutive weeks, a first for a female solo artist to do. The album remained on the Billboard 200 charts for a grand total of 306 weeks total in the past forty years, proving its longevity and cross-generational appeal. It has sold over 25 million copies worldwide. It charted at number 29 in Japan, number 13 in New Zealand, number 8 in Norway and number 4 in the UK.

Tapestry won the Grammy for Album of the Year in 1972. Carole won for Best Female Pop Vocal Performance. “It’s Too Late” won Record of the Year and “You’ve Got a Friend” won song of the year. Rolling Stone magazine has ranked the album at number 36 on its list of 500 Greatest Albums of All-Time.

Side one opens with “I Feel the Earth Move” which was also the first single from the album. It was part of a one-two punch as it was featured on the B-side of “It’s Too Late”. Carole plays that piano with such passion, mirroring the emotions of the lyrics. The song climaxes at the 2:44 mark and then winds down to a single note.

“So Far Away” was the second single released from the album (reaching number 14 on the Billboard charts). James Taylor plays acoustic guitar on this track. Carole’s voice and the instrumentation (piano, guitar and flute) paint the melancholy mood of the song perfectly.

The award winning single “It’s Too Late” is next. It spent five of its fifteen weeks on the chart at the number 1 spot, knocking out the Honey Cone’s “Want Ads”. This track has so many great layers to it - the piano hooks, the vocal harmonies, the guitar - each one as sweet as the last. An amazing song.

“Home Again” and “Beautiful” follow. These are all very good pop songs, as would be expected. Pleasant to the ear and soothing.

“Way Over Yonder” finishes the side. It has a nice blues feel to it, especially with the saxophone solo featured in the second half. Carole’s voice has that certain tonal quality that fits well to the style of music.

The award winning “You’ve Got a Friend” opens side two. Carole wrote and released the song first, yet it gained even more popularity when James Taylor recorded it later that year (his version went to number 1 on the singles chart). This one of those songs I know by heart, having sung along to it many times. It makes you think about all those key friendships in your life.

“Where You Lead” is next. The song lyrics get their inspiration from the Book of Ruth, one of the books of the Hebrew Bible. Barbra Streisand recorded the song later in 1971. Carole would re-record the song (along with her daughter Louise Goffin) in 2000 as the theme for the hit WB show Gilmore Girls. The original is a little more stripped down with less orchestration. The lyrics here are about a relationship between a couple in love, with one proclaiming she will follow her man wherever he goes.

“The Shirelles made Carole’s “Will You Love Me Tomorrow?” a hit back in 1960. Here, she gives her own slower tempo version. I think the single lead voice gives the song an even more personal feel to it; she really puts the emotion into the lyrics. Oh, and you can pick up James Taylor on some backing vocals too.

“Smackwater Jack” was the released as the B-Side to “So Far Away”. As occasionally happened in those classic days of singles, it received as much airplay as the A-Side. Carole originally co-wrote this song; it was also recorded in 1971 by Quincy Jones for an album of the same name. This story-song has a nice little swing to it thanks to the guitars.

The title song “Tapestry” is next. The song is reflective of a life gone by as the singer is about to face death. It is a simple but beautiful piece.

The record closes with “(You Make Me Feel Like) A Natural Woman”. Carole co-wrote it back in 1967, when it became a hit song for Aretha Franklin. Unlike the Queen of Soul, her version is a little bit restrained but no less full of emotion.

I was only six years old when this record came out, well before I was into my own record-buying mode. Still, I heard the singles on the radio quite a bit. I really came to appreciate the entire album when I was building my CD library in the early 90’s. A two-disk collection included all twelve tracks from this landmark album. Carole was a founder of the singer-songwriter movement and Tapestry is a wonderful pop music legacy.
Posted by Martin Maenza at 7:33 AM