Pat Benatar - In the Heat of the Night 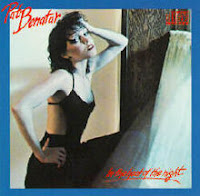 On October 20th of 1979, Pat Benatar exploded on the rock scene with her debut album In the Heat of the Night. With a combination of original tracks and amazing covers, the album became a best-seller (going all the way to number 12 on the Billboard album charts and selling over a million copies) and established her as an artist to watch in the 80’s.


The first track on the album and on the side is “Heartbreaker”. The opening drumbeats and guitar chords give notice that this song and record are going to rock. And then, when Pat starts that first verse you know she means business. It is the chorus, however, that does it for me - her classically trained musical background gives her an amazing edge as she holds those notes with apparent ease. This track was the third one released as a single and the one to break through into the charts. It reached number 23 in the US and number 18 in Canada. This was the one that helped her crossover from the album-rock stations to the pop stations.

John Cougar (Mellencamp) released “I Need a Lover” on his 1978 album A Biography and then again on his self-titled 1979 record. His version had an incredibly long instrumental opening. Pat’s version however gets right into it. She also shows how well she knows her instrument (her voice) - she goes from a sexy growl to beautiful harmonies. Her band also does an amazing job on this one too. This song was released as the first single from the record, but it failed to chart.

Pat covered two tunes from the band Smokie. The first was “If You Think You Know How to Love Me” off of the 1975 album Changing All the Time. Pat’s version, which has a harder rocking sound than the original, was the second single released from the album. However it too failed to make a dent on the charts.

The second cover from that band is “In the Heat of the Night” from the 1977 album Bright Lights & Back Alleys. I love the way the guitars ring out in an echo and how the drums thump like a rapidly beating heart. It sets the mood perfectly. Pat’s voice expresses the yearning in the lyrics, and then her angelic backing vocals around the three minute mark…oh…just…oh.

Pat co-wrote “My Clone Sleeps Alone” with band-mate bassist Roger Capps. The opening piano is like a child’s lullaby with Pat’s vocals mirroring that beautiful little melody for the first verse. The song then erupts into full rock regalia with the second verse. It is a great end to a great first side.

Side two opens with “We Live for Love”; it was written by the band’s lead guitarist (and Pat’s future husband) Neil Giraldo. This fourth single rode the wave of “Heartbreaker”, peaking at number 27 in the US charts and number 8 in Canada. Pat again goes to her upper register on the chorus, giving rock a new sound that many of the other gal rockers of the time (Joan Jett, Chrissie Hynde) were not touching. The only ones in this territory were Debbie Harry and Kate Bush, but neither was as hard rocking. Pat bridged a gap.

“Rated X” was written by Nick Gilder and appeared on his 1977 debut album You Know Who You Are. Pat’s version was the fifth and final single from the album but like the first two singles it too failed to chart. This is one of my favorite songs on this record (and that’s saying a lot since I love this whole record). Something about the subject matter and Pat’s sexy delivery spoke to the teenaged me and made its mark forever on my musical consciousness.

“Don’t Let It Show” was written by Alan Parsons and appeared on his 1977 album I Robot. That version had a futuristic feel with organ music. This version is more tender and, at the same time, a bit haunting in vocals. She makes me really feel these lyrics.

“No You Don’t” was originally recorded by Sweet on their 1974 album Sweet Fanny Adams. Knowing this, I can almost hear how Sweet’s version might go (I’ve not heard theirs before). This version is a solid rocker though. Again, Pat shows she can growl the lyrics with the best of them and then elevate those choruses. I love the guitar solo that starts at the 2:20 mark - that’s the stuff of my rock and roll youth.

The album concludes with another collaboration Pat did with Roger Capps - “So Sincere”. This one has a refreshingly different sound to it. I like how both sides close with an original song by this collaborative duo. Very symmetrical.

I can tell you exactly when I got this record on vinyl. Though it first came out in October of 1979, I would not get my copy until my fifteenth birthday in February of 1980 (as a gift from my family). Something about getting albums back then as presents, either for birthdays or Christmas, was always cool. You knew what it was from the size and shape. But if you had a number of albums on your “wish list”, you didn’t know which one it was until you pulled off the wrapping paper.

I really was excited to get this record as I knew the two chart climbing tracks from the top 40 radio I listened to. Little did I know that was just the tip of the iceberg. I loved this record instantly after the first listen. As a teenaged boy, that cover with Pat provocatively standing in her room on a hot night was the stuff of dreams. And her voice - how could a teen boy not fall in love with that voice? Incredible! I can’t tell you how many nights I listened to this one in my darkened room with the headphones on just letting the music and Pat’s voice take me on an incredible journey. No matter what was going on around me, no matter what problems I wanted to forget - this album would do it every time.

Now, over three decades later, I still love this album. I’d easily put it into my personal top 10 of the 1970’s. It is one of those albums I have on all of my i-devices. If I have the sudden urge to hear it, it is there to be pulled up.
Posted by Martin Maenza at 5:18 AM

Email ThisBlogThis!Share to TwitterShare to FacebookShare to Pinterest
Labels: 70's, debut, In the Heat of the Night, music, Pat Benatar