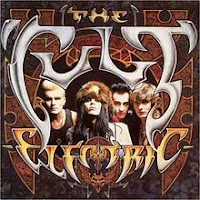 In 1987, the British band the Cult changed up their previous music style, going from Gothic rock to a more hard rock sound, with their third studio album Electric. For this release they also brought on board producer Rick Rubin, one of the founders of Def Jam Records, to assist with the changing of the sound. The end result was the band's first Platinum selling album.


Side one opens with "Wild Flower", which was the third single from the record. It reached number 24 on the UK singles chart. It opens with a strong riff by Billy Duffy on guitar and Jamie Stewart on bass. Les Warner’s drums provide the steady rock rhythm. Ian Astbury then joins in with growling vocals. You can hear how they’ve drawn from classic rock sounds of the 60’s and 70’s.

"Peace Dog" has an equally hard edge to it. It has a little bit of a blues feel to it as well, along the same vein as Led Zeppelin.

"Lil' Devil" was the second single from the album. It went to number 18 in the UK. It continues the formula that works so well from the opening tracks.

"Aphrodisiac Jacket" is a great song title; I just like the way it sounds. The guitar work pays a little homage to Jimi Hendrix, another 60’s great.
The album gets its title, in part, from the next track "Electric Ocean". As this song and the others show, the band has really embraced the classic electric guitar sounds. This one sounds like I would have heard from across the street in the 70’s, when the older neighbor’s band was practicing in his garage.

"Bad Fun" has a quick-step tempo to it that moves the song along nicely. This is definitely my favorite track so far; it is a nice way to round out the first side.

Side two starts off with "King Contrary Man". This is definitely a great headphone-listening song; the opening guitars ping-pong between the speakers.

The first single from the album was "Love Removal Machine"; it reached number 18 on the UK singles chart and number 15 on the US mainstream rock chart. It actually has a slightly softer edge to it than the rest of the album, but it still rocks nicely.

"Born to Be Wild" is a cover of the classic 1968 Steppenwolf hit. Musically, they alter the pacing slightly with more of an emphasis on the guitars and the delivery of the lyrics. The Cult definitely makes the song their own with these changes.

"Outlaw" is very much renegade rock in every sense. It takes an old West-type of tale and gives it a hard jamming spin.

"Memphis Hip Shake" is one final blues rock song to close out the record. The tempo is an uneven grind that gives this one a slightly different feel from what has come before.

For me, Electric is like a Delorean trip back to the late 60’s. This record pays homage to many of the elements of hard rock ‘n’ roll that I enjoy. It is definitely worth a listen if you love classic rock and haven’t heard it before. I would agree with its inclusion on the “1001 Albums You Must Hear Before You Die” list.
Posted by Martin Maenza at 5:23 AM