Depeche Mode - Music for the Masses 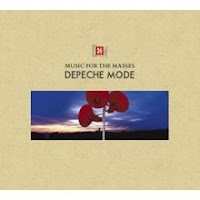 British synth-pop band Depeche Mode released Music for the Masses, its sixth studio album, in the fall of 1987.

In the US, this one did very well - reaching number 35 on the Billboard album charts. In their native UK, the record made it to the top 10.


The first side opens with “Never Let Me Down Again”, the record’s second single. It reached number 22 in the UK and number 63 in the US. I like the keyboards on this one; they mix a number of different tempos and sounds to create a nice layered effect. Dave Gahan’s vocals provide their usual haunting sound.

Martin Gore takes the lead vocals on “The Things You Said”. This slower tempo track has another interesting combination from the keyboards of Gore, Andrew Fletcher and Alan Wilder.

The first single from the record was “Strangelove”; it reached number 16 on the UK charts and number 76 on the US Billboard charts. This song about out of the ordinary sexual activities has a nice dance rhythm to it. I hear this song at least once a week on Sirius/XM 1st Wave; it is still a popular song twenty-four years later.

As you would expect, “Sacred” summons up the imagery of a church or cathedral in sound and lyrics. It continues the subtle increase in tempo of the songs so far.

“Little 15” was never meant to be a single, but the song was popular in France and thus warranted a release. Ironically, the single went nowhere. The instruments set an eerie mood.

“Behind the Wheel” starts the second side. This third single went to number 21 in the UK and number 61 in the US. I like the opening which sounds like a hubcap clattering on the pavement; the rhythm of the rest of the song has an anxious urgency to it. The B-side of “Behind the Wheel” is an awesome cover of the Bobby Troup song “Route 66”.

“I Want You Know” is the other track where Gore takes the lead vocals again. The opening reminds me of a heavy breather on the other end of a phone, stalking a person with whom he is obsessed. Gore on the accordion adds to the creepiness of the song.

“To Have and to Hold” is another ominous sounding number. The lyrics tell of someone who is looking for forgiveness and redemption. I like how the sound at the end goes back and forth across the speakers.

“Nothing” has a nice upbeat rhythm to counterbalance the ideas of futility spelled out by the lyrics.

“Pimpf” is a mostly instrumental track dominated by piano. It gets its title from the name of a Hitler Youth organization. I like how it builds heavily and then just stops. There is a long pause before a one-minute hidden track is revealed (a quirky instrumental piece).

I find Music for the Masses to be a continuation of the evolution of Depeche Mode’s sound. While familiar with some of the more often played hits, I too found the deeper tracks to be intriguing and worthy of repeated listens.
Posted by Martin Maenza at 5:17 AM

I owned the cassette version which included the bonus tracks, including the aggro mix of "Never Let Me Down Again" (recommended), "Spanish Taster" (a different arrangement of "To Have and To Hold"), and "Pleasure Little Treasure" (a song beloved by many DM fans, but one that I dislike intensely).

"Violator" is probably a consistent better album, but "Music for the Masses" has some outstanding tracks. I recently rediscovered "The Things You Said" on blip.fm and can't stop listening to it - a very Kraftwerk feel that wouldn't be heard again until Alan Wilder's departure. As for "Strangelove," I personally prefer the more minimal album version to the hit single. "Little 15" almost makes me cry.

Thank you so much for reading and for the comment. I love hearing what other people think of the albums. Sometimes it helps me to see things in a new light I might have missed before.

Such a brilliant album my favorite from Depeche Mode, Strangelove is great and also the video, also really like Nothing, the whole album is full of depth feelings and atmosphere