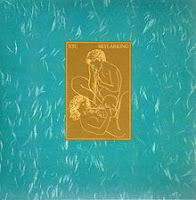 For their eighth studio album Skylarking, the English band XTC brought in producer Todd Rundgren. This 1986 album features tracks that are influenced by earlier bands like the Beatles and the Electric Light Orchestra (those are the sounds I picked up from them). The record reached number 70 on the US album charts and number 90 on the UK album charts.

While I am familiar with the group through a few of their earlier songs, most of this album is relatively new to me. It does appear on the 1001 Albums You Must Hear Before You Die list, so I thought I would give it a spin. This will be another one of my first-listening-impressions reviews.


“Summer’s Cauldron” is the first track on side one. It opens with sounds of birds and barking dogs. I immediately envision the sun rising on a small, suburban neighborhood as the heat of the summer is already upon us. The effect is a good one. The lyrics talk about someone drowning in this lifestyle, a stark contrast to the music.

That first track leads directly into “Grass”. I picked up immediately the psychedelic Beatles influence ala the Magical Mystery Tour period in the opening notes. The lyrics are very casual, every day in topic - a day in the park.

“The Meeting Place” speaks of a couple’s clandestine rendezvous. I like the grinding machine sounds used in the background of this one. Very industrial - like Billy Joel’s “Allentown” which came out four years prior.

“That’s Really Super, Supergirl” has a different sort of beat to it. Of course, I’m an instant fan since it has so many comic book references in the lyrics. Ironically, 1986 was the year that the Maid of Steel was killed off in the epic maxi-series Crisis on Infinite Earths. This is one I’m going to have to download because I’m such a comic book geek.

“Ballet for a Rainy Day” has a pleasant sway to it, with perky piano music. It leads directly into “1000 Umbrellas”, a somber track that presents the extreme unhappiness of a broken heart.

The Beatles influence is very evident on “Season Cycle”. I could easily hear Paul McCartney singing this one. Lead singer Andy Partridge has a lot of McCartney-isms in his voice on this one.

Side two opens with “Earn Enough for Us”, a song about a man’s promise to provide for his fiancée when they marry. “Big Day” is a song about a wedding day, but it really questions whether the couple have what it takes to make it last.

“Another Satellite” is next. I can pick up a slight influence of the Kinks on this one. I find it a little bit on the sleepy side in parts.

The guitar work on “Mermaid Smiled” is catchy. I like how the drums then add to the sound on the second verse, giving way to sounds of a storm. It builds nicely.

“The Man Who Sailed Around His Soul” has a jazz sound, even down to the hip finger snaps. It reminds me a bit of Mark Eitzel, an artist I got into in the 90’s. “Dying” continues along the same vein as the preceding track.

The record closes with “Sacrificial Bonfire”. It is another solid composition; I like the sounds of the crackling flames of the aforementioned fire.

The CD release added the non-album single “Dear God”. This is one I hear very often on Sirius/XM 1st Wave as well as have on mp3. The song is very different from the rest of the album, thus that explains the exclusion from the full LP. The song features eight-year old Jasmine Veilette on the opening and closing verses. The lyrics are powerful and question God’s stance on human suffering. It is a standout song to be sure and one worth seeking out.

This is a good record with a few standout tracks. I am sure I would come to appreciate it a bit more after a few additional listens.
Posted by Martin Maenza at 5:12 AM