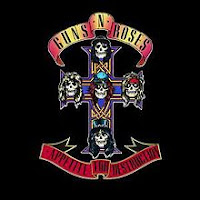 The California rock band Guns N’ Roses had an incredible recording debut with their 1987 album Appetite For Destruction, beating out the record held by Boston’s self-title debut album. The record has sold over 28 million copies world-wide.


Side one roars in with opening guitar chords and savage yell of “Welcome to the Jungle”. This one never lets up, painting a picture of a rough urban landscape where anything you want (including drugs) is available to you. This was the second single from the album; it reached number 7 on the US charts and 67 on the UK charts. VH1 ranked the song as the number 1 hard rock song of all-time.

“It’s So Easy” is up next. It was the first single released by the band but it failed to perform as expected. It only went to 84 in the UK and failed to break into the US Billboard charts. The lyrics tell of a time when the band was struggling financially. But thanks to groupies and girls, they were able to live off of others.

“Nightrain” is a song that pays tribute to a brand of cheap California wine called Night Train Express. It was popular with the guys because it was inexpensive yet high in alcohol content. The song has a high energy level that parallels that of a drunken party gone wild. I think it rocks just as hard as any of the big hits from this album.

“Out ta Get Me” tells of the troubles Axl Rose had as a youth in Indiana. It has a sense of paranoia to it.

“Mr. Brownstone” was written by Slash and Izzy Stradlin in reference to their heroin addiction, giving a day-in-the-life account of a user. Brownstone is a slang term for heroin. The guitar opening on this one is very cool; I like it a lot.

“Paradise City” was the fourth and final single from the album. It went to number 5 in the US, number 6 in the UK, and number 1 in Ireland. It is the only song on the record to feature synthesizer, played by Axl. The guitar/drum opening on this one is an 80’s classic. The chorus is an instant sing-a-long. Even before you get to the first verse, you’re hooked. By the time the song kicks into double-time overdrive near the end, you feel like you’ve been through a rock and roll spin cycle and are ready to be hung out to dry.

Time to flip the record.

The second side begins with “My Michelle”, a biographical song about a friend of the band (she is even thanked in the original liner notes). The lyrics are reflective of her actual life - from the portrayal of her parents to her own drug addiction.

“Think About You” is a fast tempo number up until the very end, which is then slow and evocative in contrast. This song too is about heroin and about how it becomes the main focus of everything for a person addicted to it.

As a single, “Sweet Child o‘ Mine” rode on the success of “Welcome to the Jungle” and scored the band its first and only number 1 record, to date, in the US. It did well in the UK too, topping out at number 6. The guitar opening by Slash is amazing with its cascading notes. The lyrics were written about Axl’s then girlfriend Erin. This is another one of those songs I’ve heard so much in the past twenty-four years that I find myself singing right along, often mimicking Axl’s vocal inflections.

“You’re Crazy” is one of the fastest songs by the Guns N’ Roses. I like it a lot because you really have to focus to keep up with the rapid-fire lyrics and guitars.

“Anything Goes” is next. It has more of a deep-grinding groove to it.

“Rocket Queen” too was written for a girl that the band knew, this time one named Barbi. Like the previous track, it has a funkier groove to it. And, there are some equally raunchy sound-effects that sprinkled through out (taken from a recorded in studio sex session between Axl and another woman named Adriana).

Appetite For Destruction came out during the final few months of my college life. The songs, all having a bit of a dark edge to them, were the furthest thing from my own life experiences. I picked the album up on cassette mostly because of the hit singles. I often glossed over the rest of the record because it was just so out of my usual listening preferences.

Years later, though, I can appreciate the record for what it is - a snapshot in time of a group of guys living a truly rough lifestyle while trying to catch their big break. The record has a solid overall theme which fits the title perfectly; while the band was hungry for fame they also did have a big appetite for destructive living.
Posted by Martin Maenza at 5:16 AM