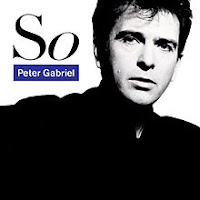 So, released on May 19th of 1986, was the fifth studio album from Peter Gabriel. The record would eventually become his most successful solo release. It was a number 1 album in his native UK as well as Austria, Canada, the Netherlands, Italy, New Zealand, and Norway. Here in the US it reached number 2 on Billboard Album chart. The record went platinum a number of times.


The record was a critical success as well as a best seller. Q magazine voted it the 81s greatest album of all time. Rolling Stone placed it at number 14 in its 100 Best Albums of the 80’s list and number 187 in its 500 Greatest Albums of All-Time list. College Music Journal noted that it was ranked number 1 in the Top 20 Most-Played Albums of 1986 on college radio. The album also received four Grammy Award nominations.

Side one opens with “Red Rain”, a song that references a recurring dream that Gabriel used to have - one where he swam in his pool drinking red wine. The song was the fifth single released from the album. The drum opening is wonderful, setting the tone nicely. The whole song has so many layers, each adding texture to the next. It ends then with simply Gabriel’s voice as if he has suddenly woken up.

The smash hit “Sledgehammer” is next. It was a number one hit in the US and Canada in July of that year. The song has an amazing horn section that gives it power. The lyrics are full of sexual innuendos. I fondly remember the video for this song playing all the time on MTV; the use of claymation really brought out the quirkiness of the song. This was a popular dance song too back in the day.

“Don’t Give Up” is a wonderful duet that features Kate Bush. Gabriel sings of being beaten down by forces outside of his control; Bush’s angelic vocals provide words of hope and support. It was the second single released from the album. I really like this song a lot.

“That Voice Again” closes the side of the vinyl release.

The fourth single “In Your Eyes” opens the second side. The song gained even more popularity when it was used in the 1989 film Say Anything…; in the iconic scene in the film Lloyd Dobler serenades his ex-girlfriend by standing outside her window with a boom box held above his head with this song playing on it. I love the piano opening and the amazing expression of love that the lyrics give.

The opening of “Mercy Street” sets the mood for the track very well. Gabriel’s vocals add equally to the music, creating a moving song.

“Big Time” was the third single; it was a top-10 hit in the US (peaking at number 8). This up-beat song about the rise to fame is one of my favorites on the record. Again, this was another popular dance song at the time and it too had an interesting video using claymation.

The instrumentation on “We Do What We’re Told (Milgram’s 37)” is rich and compelling. It is a nice contrast to the very simple lyrics that come in on the later half of the song.

The record ends with “This Is the Picture (Excellent Birds)” which Gabriel co-wrote with Laurie Anderson. She provides an assist on the vocals as well. As a fan of Anderson’s work in the early part of the decade, I like this track quite a bit.

All in all, I think this is a very solid record from start to finish. Peter Gabriel is an accomplished singer and musician, plus he gets some help on a couple tracks from two other artists of similar caliber.
Posted by Martin Maenza at 10:31 AM