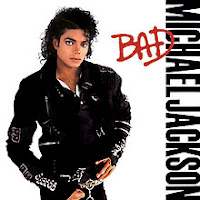 This past weekend marked the second anniversary of the death of one of pop music’s mega-stars. While some might feel put off by his personal life and questionable behavior, there is no denying that Michael Jackson put out some amazing records. And his seventh solo album Bad, released in 1987, was one of those disks.

The album has sold over 30 million copies to date world-wide; it has gone Platinum many times over. The record was a top-10 seller in all major markets in the world and went to number 1 in nearly all of them (it only reached number 2 in Australia). Nine of the eleven songs were released as singles. The album received six Grammy Award nominations, winning two. It was ranked number 202 on Rolling Stone’s 500 Greatest Albums of All-Time list (surprisingly it does not appear on the magazine’s 100 Best Albums of the 80’s list).


Side one opens with the title track. “Bad” was the second single from the record; it went to number 1 in the US, Norway, Italy and Spain. The song is edgier than earlier songs by the artist; the lyrics are about a kid from the streets who goes away to private school and returns home. The edge was further emphasized by the Martin Scorsese directed video, a tribute of sorts to West Side Story. The song and video were successful parodied by Weird Al Yankovic with the song “Fat”. I really like the beat on this one; it really moves nicely.

“The Way You Make Me Feel”, the third single, also reached number 1 in the US and Spain. The song is a simple ode to a lovely woman who has really captured the attention of a young man. The opening is solid; I love how the percussion ping-pongs from speaker to speaker. It is definitely my favorite track from this record. The lyrics, the music, and the vocals - they all work perfectly here.

“Speed Demon” is a straight-forward song about driving fast and came about after Michael had gotten a traffic ticket for speeding. The song was scheduled to be released as the tenth single but those plans were scrapped. Still, a video was made for it. I think the song moves fairly well and would be a good, unexpected candidate for that driving play-list right along side songs like Sammy Hagar’s “I Can’t Drive 55” or Golden Earring’s “Radar Love”.

“Liberian Girl” was the last single released world-wide from the album but it failed to make any major splashes. While originally written in 1983 for the Jacksons’ Victory album, it was reworked. The opening lines are in Swahili, and the rhythms give the song a very exotic sound.

“Just Good Friends” features Stevie Wonder on vocals and keyboards. It has a nice funky sound to it. I’d love to put this one in a play list with “The Girl Is Mine”, “Say Say Say” and “Ebony and Ivory” - a Jackson/McCartney/Wonder round-robin of sorts.

The second side kicks off with “Another Part of Me”, the sixth single. But by this point in 1988 most folks had the album already so the single didn’t do as well (only number 11 in the US). I like the rhythm on this one as well; I recall dancing to it out in the clubs my first year out of college. The song’s message is of unity and oneness - talking about how we’re all connected. It has a great message with great beats. It is another favorite of mine from this record.

“Man in the Mirror” was the fourth single and the fourth US number 1; it reached number 2 in the UK. It features Siedah Garrett (co-writer of the song), the Winans and the Andrae Crouch Choir on backing vocals. This song had a touching video and became quickly associated with human outreach efforts. I really like the gospel feel to it as well as the message of the lyrics - you have to look to yourself to make a change.

“I Just Can’t Stop Loving You” was the first single from the record; the song went to number 1 in the US, the Netherlands, Norway and the UK. Siedah Garrett duets with Michael on this slower ballad. For me, the song harkens back to earlier ballads by Michael. I find it very soothing.

With “Dirty Diana”, Michael went five for five in the US for number 1’s from the album. It was the third number 1 from the record in Spain as well. This is a nice hard rocking number that features Steve Stevens, former guitarist for Billy Idol, on the track; Stevens‘ guitar solo is searing. The lyrics take a hard look at groupies and the temptations to touring music artists. I really like seeing this aspect of Michael’s musical repertoire. He shows he can cover many genres well - pop, rock, dance, R&B.

“Smooth Criminal” was the seventh single and appeared to renew interest on the charts. It went to number 7 in the US, number 8 in the UK and number 1 in the Netherlands and Spain. The music video was a short classic with a full story and served as the centerpiece of the Moonwalker film. The song features a repetition of the phrase “Eddie, are you okay?” that works as a hypnotic mantra; it pulls you right into the funk of this groove and doesn’t let you go. It was another club classic back in the day.

The CD release of Bad included the bonus track “Leave Me Alone”. As a single it went to number 1 in Spain and UK in 1989. The music video poked fun at all the false rumors that had been circulating in the tabloids at the time about Michael. The lyrics too reflected that theme as well, basically a way for Michael to tell everyone to just stay out of his business and let him be.

Having come out in the fall of 1987, Bad was another of those albums I had gotten on cassette format. As such, I probably didn’t play it as much as I would have with his earlier albums. Luckily, the songs could be heard pretty much everywhere. The number 1 hits guaranteed maximum radio airplay. The videos ruled MTV. The songs were played in clubs every night. In short, I never really had to worry about the inconvenience of the cassette format. I sort of got away from the album until the HIStory compilation came out in 1995 - it featured a number of the tracks on it.

This week was the first time in a long time I’ve listened to the album in its entirety from beginning to end. And, I have to say, it still holds up very well. While not my overall favorite of his solo efforts (that spot will always belong to Thriller), I’d put Bad in a tie at the number two spot with Off the Wall. I think these three really represent the pinnacle point of his solo musical career; together they are a truly hard act to follow.
Posted by Martin Maenza at 5:14 AM

I think that the Bad album didn't get a lot of the praise it should have because of being released after thriller. The album features many memorable songs.

Thriller was hard to top, but Bad certainly was up to the challenge to at least match it. As I said in my review, Bad was the end of the trilogy for me (I didn't get into Dangerous as much).