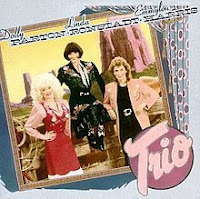 
“The Pain of Loving You”, a Parton/Wagoner collaboration, opens the first side. The song opens with a simple acoustic guitar (Emmylou) and the three voice blending in a sweet harmony. It is a solid start to this collaborative project.

“Making Plans” has a nice viola opening and then solo later on this slower tempo track. I also like the fluttering of the mandolin. Dolly takes the lead vocals. A very nice song in a classic country vein.

“To Know Him Is to Love Him” was originally written by Phil Spector and recorded by the Teddy Bears in 1958. The gals’ version, the first single, has a nice slower tempo, wringing out the emotions well. I like the tremolo guitar on this one.

“Hobo’s Meditation” was first recorded by Jimmie Rodgers in 1930. Linda takes the lead vocals on this classic. The song makes me think of a train slowly winding its way through the countryside with the sun slowly going down in the west. Very relaxing.

“Wildflowers” is an original song by Dolly written just for this album. She takes the lead vocals on this song about a restless heart looking for freedom. It is a wonderful tune.

“Telling Me Lies” was originally recorded by Linda Thompson on her 1985 solo record. Linda takes lead vocals on this, the second single from the record. Like some of her recordings, this one is a little less country and a little bit more pop.

Side two starts with “My Dear Companion”, a traditional country song. Emmylou’s lead vocals on this one are very comforting.

“Those Memories of You” was first released by Pam Tillis in 1986. This Dolly-lead track was the third single from the album. It has a nice twang-swing to it that I like a good bit.

“I’ve Had Enough” was penned by Canadian singer Kate McGarrigle. This one is very gentle and tender; again the harmony of the three vocalists is simply beautiful.

The record ends with two more traditional country tunes. Dolly takes the lead on “Rosewood Casket”, a song about facing death with strength and faith. It paints a very vivid picture with its lyrics.

“Farther Along” is a southern gospel song written in 1911; the lyrics deal with wondering why some sinners prosper while those who live more righteous suffer in poverty. It ends the album on a very somber tone.

As I noted in a recent post, I wasn’t very much into country music during the 80’s. I was certainly aware of the album Trio and knew quite well of the three female leads. I was a huge Linda Ronstadt fan since the 70’s, and I knew of Dolly’s crossover work. At the time this just wasn’t something I would have listened to a lot.

As I am getting older, I’ve come to appreciate more genres of music - especially country. I found this album to be very well done. The musical arrangements respect the roots of the songs while also catering to the beautiful voices of Emmylou, Linda and Dolly. There are definitely tracks I’ll want to add to my music library in the near future.
Posted by Martin Maenza at 6:38 PM