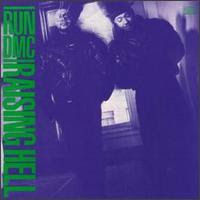 In 1986, the hip-hop kings from Queens crossed brought their music into the mainstream - thanks to a breakthrough hit and major exposure on MTV. Run-D.M.C.’s third album Raising Hell sold incredibly well (went triple platinum) and was critically praised (Rolling Stone ranked it number 120 in their 500 Greatest Albums of All-Time).

Raising Hell came out on July 14th of 1986 while I was working in New Jersey for a six-month stint, thus I purchased it on cassette. The first side was definitely my favorite as the first four tracks are a solid set. I could then usually flip it, back up a bit and pick up the final four tracks on side two.


“Peter Piper” opens the first side. The guys look to nursery rhymes for inspiration here, proving that they can work with just about any source to make fresh rhymes.

“It’s Tricky” was the final single from the record, but it only reached number 57 on the US Billboard Hot 100. The song led to a lawsuit against the band when the Knack accused them of sampling their song “My Sharona” without permission. This has to be my favorite song from the album if not from the band. I love the energy on it and how hard it rocks. Of course, I love too how the guys licensed it for the SSX Tricky stunt snowboarding video game in 2001. My son who was only six at the time really got into the song - the perfect way to get a whole new generation of fans.

“My Adidas” is an ode to the favorite brand of shoes of the band. It too was used in video game - 2005’s Tony Hawk’s Pro Skater 4.

“Walk This Way” was the second single from the record and the first US Billboard Top 40 hit for the group (it peaked at number 4). Aerosmith’s Steven Tyler and Joe Perry performed on the record and appeared in the classic music video. The song helped the rappers reach a wider audience and it marked a major comeback for Aerosmith as well (leading to a huge new chapter in their musical story as well). “Walk This Way” was ranked as number 4 on VH-1’s 100 Greatest Songs of Hip-Hop. This was a hugely popular song to dance to back in the day.

“Is It Live” samples a very funky bass-line and a some cool percussion.

“Perfection” changes it up a bit with slower beat.

“Raising Hell” is another great example of how Run-D.M.C. likes to rhyme over a true hard rocking beat.

The third single was “You Be Illin’”, which went to number 29 on the US Billboard Hot 100. I love the lyrics on this one - the examples of some ill (crazy, uncool) behavior are very comedic. It is my second favorite track on the record.

“Dumb Girl” has a catchy, repetitive hook to it. The lyrics mock the type of girls that’ll do anything to get and keep a man.

“Son of Byford” is a short, throwaway track that leads into the final one “Proud To Be Black”, a salute to important figures from black history (Harriet Tubman, Martin Luther King, Malcolm X, George Washington Carver and more).
Posted by Martin Maenza at 5:19 AM