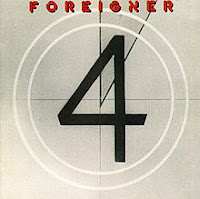 Thanks to a number of very successful singles, it was propelled to the top of the charts and was the band’s only number 1 LP in the United States (of the eighty-one weeks it spent on the US Billboard Album chart, ten of those were at the number 1 spot). The album was produced by “Mutt” Lange and band guitarist Mick Jones.


The first side opens with “Night Life”, a song about looking for some nocturnal action in the city. Lou Gramm and Mick Jones co-wrote this song and five of the other tracks. The remaining tracks were written by Jones alone.

“Juke Box Hero” was the third single from record, reaching number 26 on the US Billboard Hot 100. The lyrics tell a great story about a young rock fan that, after failing to attend a sold-out concert, purchases a guitar, works hard to master it, and becomes a rock star himself. In full circle, the song ends with him inspiring another young fan. I love how Dennis Elliott’s drums open this one with their steady thump-thump-thump. This is one of those that I just have to crank up, especially for those guitar chords; it is definitely my favorite from the record.

The fourth single was “Break It Up”; it also reached number 26 on US Billboard Hot 100. The lyrics tell of a despondent man who isn’t ready for a relationship to end. His woman, however, doesn’t share his viewpoint at all. Gramm has that pleading voice down perfect.

“Waiting for a Girl Like You” was the second single, scoring a number 2 on the US Billboard Hot 100. It stayed at that spot for a record-setting ten weeks total, denied the coveted top spot first by Olivia Newton-John’s “Physical” and then Hall & Oates’ “I Can’t Go for That (No Can Do)”. This one was a slow dance favorite during my high school years; the lyrics were perfect expressions of those hormonal teen feelings we were all having.

The fifth single released was “Luanne”, though it failed to make the US Billboard Top 40. I’ll be honest with you; until I started listening to this full album via MP3s a few years ago I barely even remembered this one. It is a fairly generic girl-name song.

The hit single “Urgent” kicks off side two with a very classic guitar opening. It was the first single released from the record, holding the number 4 spot on the US Billboard Hot 100 for the entire month of September in 1981. The song also held the number 1 spot on the Rock Tracks chart for four weeks. Motown great Junior Walker played saxophone and then unknown Thomas Dolby played synthesizer on the track. This song definitely makes me think of the summer between my sophomore and junior years of high school; it could be heard on the radio constantly. A very solid tune.

Next up is “I’m Gonna Win”. This song has the honor of being the B-side to both “Juke Box Hero” and “Waiting for a Girl Like You” singles. I guess the record company felt the song could use that extra push. For me, personally, the song is just average. It works well for a deep-track filler but that’s about all it does for me.

“Woman in Black” has a nice forty-five second guitar opening and a rhythm that drives the song to the chorus. The lyrics are fairly straight-forward: a ravishing woman in a little black dress completely entrances the man.

“Girl on the Moon” was the B-side to the “Urgent” single. The music gives a very eerie feel to this song about a man whose mind wanders to a time where he saw an apparition of a beautiful girl. I think this one would have made a better single than “Luann”.

The album closes out with “Don’t Let Go”. This mid-tempo rocker has potential but, for me, it fails to deliver in the end.

For me, Foreigner 4 is a pretty decent album that puts me back into my early high school years. I like about seventy percent of the tracks, and I give extra bonus points for the four big hits. The album cover is also very iconic - a simple design that reminds me of those classic “countdown” blips before a movie started.
Posted by Martin Maenza at 6:05 AM