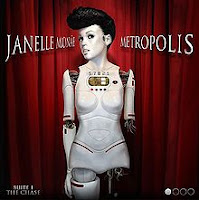 It was February this year when I first discovered Janelle Monáe. I was watching the Grammy Awards and was totally blown away by her performance. I sought out music videos and then decided this was one new artist that I had to hear more of. I quickly downloaded a couple of her albums.


Turns out Monáe had been active in music for a number of years. Her debut album is the 2007 Metropolis: Suite I (The Chase), part of a larger four-part concept album made up of suites. Set in the year 2719, this first suite tells the tale of a female android Cindi Mayweather who is mass produced for commercial consumption. The critically well-received EP album reached number 115 on the US Billboard Hot 200, and number 20 on the Billboard R&B charts. In 2009 it was re-released as a special edition with two additional tracks.

The EP opens with “March of the Wolfmasters”, a big orchestrated piece that sets the tone for the story. We learn that Cindi has fallen in love with a human and thus must be disassembled. Bounty hunters are to use extreme force to take her down. I love the whole sci-fi aspect of this record; it really appeals to my love of that fiction genre.

Next up is the first single “Violet Stars Happy Hunting!”, a funky dance track that introduces us to Cindi and her world. This one has an infectious beat that is impossible to resist, and Monáe voice is like a sweet siren song that draws you into the story. I love too how it segues seamlessly into the next track.

“Many Moons”, the third single, was ranked number 47 on Rolling Stone magazine’s list of the 100 Best Songs of 2008 and was nominated for the Grammy for Best Urban/Alternative Performance. It opens with a refrain referencing voodoo and borrows music and lyrics from a Sesame Street song, “the Pinball Number Count” that was originally performed by the Pointer Sisters. This takes me back to my childhood in the 70’s as that song was ingrained into my head as an elementary school child. The lyrics make a strong social commentary on the woes of today’s world.

“Cybertronic Purgatory” is another short track with a madrigal sound. The vocals are angelic and matched beautifully by an organ.

The second single is “Sincerely, Jane”. It combines orchestration and a jazzy swing effortlessly. It reminds me of something you would have heard in a classic James Bond film.

The special edition adds first “Mr. President”, a track with a classic 60’s soul groove to it. The lyrics are an open letter to the leader of the free world and how he plans to address current problems (education of the youth, the hungry and the homeless, government spending, health care, etc.).

It then closes with Monáe’s version of “Smile”, a song which has instrumental themes dating back to the 1936 Charlie Chaplin movie Modern Times. In 1954, Nat King Cole charted with a version; it has been covered by many artists over the years since them. Monáe’s delivers a very traditional rendition that allows her pitch-perfect voice to have the spotlight; she does an amazing job on it.

Though the special edition clocks in at just over twenty-six minutes long, Metropolis: The Chase Suite packs a lot of punch in that time. The songs are tight and well produced; the musical combinations are refreshing and so powerful. Janelle Monáe has the musical talent and artistic vision to have a long career in music. If you are not familiar with her music, you should check her out (and this is the place to start). Trust me, you will not be disappointed
Posted by Martin Maenza at 4:30 AM