The Clash - Give 'Em Enough Rope 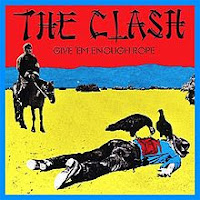 Sandwiched between their self-titled, well-received 1977 debut record the Clash and their landmark 1979 album London Calling (click here and here for each of those respective reviews) came 1978’s Give ‘Em Enough Rope (it was released on November 10th). In the UK it went to number 2; in the US it was the first of the band’s albums to be released and reached number 128 on the US Billboard Hot 100.


Rolling Stone and Time magazines both voted Give ‘Em Enough Rope album of the year in 1978.

Side one starts with “Safe European Home” Simonon’s, Mick Jones’ and Joe Strummer’s raging guitars. The lyrics speak of the reluctance of traveling abroad, to avoid robbery and violence.

“English Civil War”, the album’s second single, went to number 25 in the UK. The song is an updated take on the American Civil War song “When Johnny Comes Marching Home” with the lyrics reflecting on the state of politics in the UK at the time. The trashing guitars and driving tempo serve the song well.

“Tommy Gun”, the first single from the album, reached number 19 on the UK charts. Drummer Topper Headon does a great job recreating shooting sounds with quick snare drum beats. The lyrics very much condemn terrorist acts in the Middle East and the hi-jacking of aircraft.

“Julie’s Been Working for the Drug Squad” is the Clash’s thoughts on “Operation Julie”, a UK police crackdown on the production of LSD in the mid-70’s. I like the lyrical reference to the Beatles’ song “Lucy in the Sky with Diamonds” and the carefree, rocking beat with the playful piano.

The lyrics of “Last Gang in Town” speak to the violence in the streets of London at the time, including racial unrest between various groups of youth.

Side two opens with “Guns on the Roof”, another commentary on global terrorism, war and corruption. Its main guitar riff is similar to the Who’s “I Can’t Explain” from 1965.

“Drug-Stabbing Time” has a quick-step rhythm that is mirror by short lyrical bursts, with the title repeated various times through out the song. I like that it doesn’t follow a typical verse-chorus structure; that further adds to the chaotic mood of the song.

Jones takes the lead vocals on “Stay Free”, giving the song a different sound from the others. It has a more pop sensibility to it versus the hard rocking punk flavor of the others. That pleasant sound contrasts the nature of the troubled youth in the lyrics.

“Cheapskates” is full of Strummer’s brusque and bitter lyrical delivery, and it talks about the fact that the band still has to watch their money even though they‘re now selling records.

“All the Young Punks (New Boots and Contracts)” tells of how the band worked hard to get their music heard and that they are still the same young punks they were before.

Give ‘Em Enough Rope is another of those albums I heard a lot of during my high school years via my older brother, who is a huge fan of the Clash. The record holds up well thirty three years later.
Posted by Martin Maenza at 4:30 AM