DVD: The Love We Make 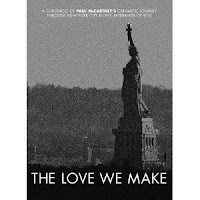 Just released on DVD is The Love We Make, a documentary film directed by Albert Maysles and Bradley Kaplan. This ninety-four minute narrative follows Paul McCartney's activities and encounters during the days post-September 11, 2011 in New York City.

From the introduction, we learn that McCartney was on a jet waiting on the tarmac to take off when the 9/11 attacks occurred. The flight was postponed and he got to feel first hand what the great city was going through during those chaotic and emotional times.


In footage shot from October 12th to 23rd in 2011, we follow McCartney as he rehearses numbers with his band and does interviews with Dan Rather from 60 Minutes, Pat O'Brien from Access Hollywood and Howard Stern. We also see McCartney interacting with his driver George between brief strolls along the streets of Manhattan, meeting with fans and having casual conversations with people he encounters.

The later half of the film focuses on the Concert For New York, giving us a behind the scenes glimpse as McCartney waits to perform. We see him interact with old friends like James Taylor and Elton John, as well as his daughter Stella, actors Jim Carrey and Harrison Ford, and former President Bill Clinton. Sprinkled through out this section are moments from the Concert, including performances by Eric Clapton, Mick Jagger and Keith Richards, Billy Joel, Bon Jovi and more.

Maysles has experience shooting documentary style pieces of rock stars. He was the cinematographer on the Rolling Stone's 1970 film Gimme Shelter and also documented one of McCartney's earliest visits to the US as a musician in 1964's What's Happening! The Beatles in the U.S.A.. With this film, he opts to shoot everything in black and white, giving the piece a touch of a simpler, gentler time. The only time things slip into color is when he incorporates footage from TV interviews like 60 Minutes or from the actual Concert For New York.

I took a couple things away from my viewing of The Love We Make.

First, seeing McCartney at then-age 59 contrasts a bit with the Beatle of the 60's and Wings leader of the 70's with whom I grew up. You can see the effects of time slowly moving in on this musical legend, but it does not slow him down too much. He comes across as very amicable and approachable, especially seen with his interactions with perfect strangers on the streets. Still, you can see that his years of experience provide him great wisdom when it comes to handling those situations. He clearly knows when it is time to make an exit and he is very gracious in doing so.

Second, it is interesting to see McCartney the celebrity when he is interacting with the media and other celebrities. Again, he comes off very warm and friendly. Some of my favorite moments include seeing him with Ozzy Osbourne, and I liked seeing McCartney's impressions of people when he speaks about them. He is very funny and charming.

Finally, I got a real sense of how well respected and thought of McCartney is, both by layman and those in the industry. Everyone seems to like him well enough and feel honored to be in his presence. Now, maybe some of that had to do with the ever-present camera but there are moments when it is clear the camera was not a factor; we see moments that appear true and organic.

If you are looking for a film that highlights mostly McCartney's music and performances, this might not be the best fit. While he does perform numbers like "I'm Down", "Yesterday", “Let It Be” and "Freedom", this is not a purely musical piece. This is very much a portrait of the man during the time of a key event in this new century. It shows how one man, albeit a very famous one, attempts to provide what he can to a city and a country that were hurting in the wake of a tragedy.
Posted by Martin Maenza at 4:31 AM