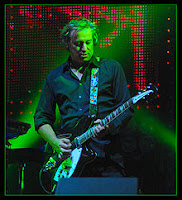 Happy fifty-fifth birthday today (December 6th) to R.E.M. guitarist and co-founder Peter Buck. Born in California, his family eventually moved to Atlanta, Georgia. After dropping out of Emory University, he moved back to Athens, Georgia, and began attending the University of Georgia. It was while working at a local record store that he met future bandmate Michael Stipe.

Besides performing with R.E.M., Buck as been an official member of a number of other groups as well. These include Hindu Love Gods, and Robyn Hitchcock and the Venus 3. As a record producer, Buck has worked with the Fleshtones, Uncle Tupelo and more. He has also been a session musician for the Replacements and Billy Bragg.

Here are the three album reviews I did from Buck's 1980's offerings with R.E.M. Enjoy.