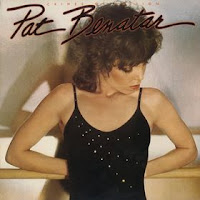 Happy fifty-sixth birthday today (December 29th) to guitarist Neil “Spyder” Giraldo and husband to rocker Pat Benatar (the two have been married since 1982).

After a strong debut album In the Heat of the Night in 1979 (click here for my review of that one), Pat Benatar followed it up on August 5th of 1980 with her second album Crimes of Passion. The album did very well, reaching number 2 on the US Billboard Album chart with a total run of ninety-two weeks, and has been certified multi-platinum.


Side one opens with “Treat Me Right”, the album’s third single which went to number 18 on the US Billboard charts and number 12 in Canada. Giraldo’s urgent, opening guitar chords instantly pull me into the song. Benatar’s vocals are stunning yet so forceful. Who would dare disobey her? Not me.

“You Better Run” was the first single from the album; it reached number 42 on the US Billboard Hot 100. The video for the song has the distinct honor of being the second music video ever aired on MTV in 1981. This one has a steady, driving rhythm from the guitars and from Myron Grombacher’s drums.

The future husband and wife collaborated on composing “Never Wanna Leave You”. This one has a bouncy beat with the vocals delivered in a similar pitter-patter pattern. Benatar sustains some amazing notes over multiple syllables on the chorus.

“Hit Me with Your Best Shot” was the second single; in the US it went to number 9 and in Canada it went to number 10. This was a big dance hit back in the day at high school dances, even years later after it was a hit. It has a high energy level and plenty of attitude. Definitely a favorite.

“Hell Is for Children” takes on the very serious subject matter of child abuse. The slow tempo of the opening verses set the tone of secrecy, and then the tempo builds to a forceful, aggressive finale. This one really moves me, even to this day. It was a big hit on the album-oriented rock stations even though it was not released as an A-side single.

Side two begins with “Little Paradise”, one of Giraldo’s tunes. Again, another amazing guitar opening. I really like how Giraldo, Scott St. Clair and Roger Capps really change things up from one song to the next.

“I’m Gonna Follow You” slows things down a bit with a slinky, stalker tempo. The song was originally written by Billy Steinberg and appeared on the 1979 debut EP of his band Billy Thermal.

“Wuthering Heights” was originally written by Kate Bush, released as her debut single from her 1978 debut album The Kick Inside. The song was inspired by the 1970 film version of the 1847 novel by Emily Bronte, the tragic love story between Catherine and Heathcliff. I remember reading this one in high school and having Benatar’s hauntingly beautiful version of the song at the same time was very cool. I always like when two of my favorite things (reading and music) come together in such a way.

“Prisoner of Love” was the B-side of the second single. I like the hooks on this one’s chorus and the vulnerability of Benatar’s vocals on the verses. It is definitely an underrated track.

The album closes with “Out-A-Touch”, a song about a person who has let fame get the best of them.

I had Crimes of Passion on vinyl back in 1980 and played it a lot during my high school and college years. Between this album and Pat Benatar’s debut the year prior, I was a huge fan. I still enjoy this record thirty-one years later; it is one of those albums I like having available on my many devices (iPod, iPhone, iPad) so I can listen to it whenever the whim strikes me. I never tire of it.
Posted by Martin Maenza at 4:30 AM