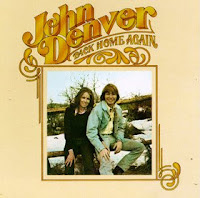 Welcome to another edition of Seventies Saturday. Today (December 31st) would have been John Denver’s sixty-eighth birthday had he not died in an aircraft accident in 1997.

In 1974, at the height of his growing popularity, John Denver released his seventh studio album Back Home Again. This was his first album to reach number 1 on both the US Billboard Hot 200 chart and the US Billboard Country chart; it also went to number 1 in Canada and number 3 in the UK.


Side one begins with the title track “Back Home Again”. As the second single, it reached number 5 on the US Billboard Top 40 chart, number 10 on the Canadian chart, and number 1 on the US Country, US Adult Contemporary, Canadian Country and Canadian Adult Contemporary charts. The song won the Country Music Award for “Song of the Year” in 1975, the same year that Denver was named “Entertainer of the Year” during the same awards ceremony. The lyrics tell of the joy of returning home after a long time away, to love and comfort that only home can truly bring.

From there, it is time to go “On the Road” with a gentle guitar melody. The music wanders along in a way to mirror the lyrical tale.

One of my favorite memories of “Grandma’s Feather Bed” is when John Denver performed it on the Muppet Show in the late 70’s. It is a fun, bouncy song made even more entertaining by Henson’s chickens, dogs, and pigs and such. The song is very much about joyful memories from childhood and visiting family. The song’s writer Jim Connor provides the banjo on this one.

“Matthew” is a story of a Kansas born man, an uncle to the singer, who tells the lad about his life. Matthew was a farmer who worked hard and enjoyed life. The song, a celebration of the American heartland, paints a very vivid picture for the listener.

“Thank God I’m a Country Boy” was released as a single but not from this album. That version came from 1975’s concert album An Evening With John Denver and reached number 1 on the Top 40 and country charts in the US and number 1 on the Canadian pop, adult contemporary and country charts. The song was written by John Martin Sommers in a 2/4 time that is often used in country two-step music. Listening to this one always puts me in a good mood; how can you not smile and sing along?

Denver gets additional vocal help from Julie Connor on “The Music Is You”, parts of it sung in a round-style.

“It’s Up to You” is a song about following your heart, taking control of your life and not letting others dictate how you live it. The song’s composer Steve Weisberg assists on guitar on this one.

“Cool an’ Green an’ Shady” has a very laid-back musical composition that brings to mind lazing on a sunny day along side a babbling brook. It is all about taking time to just relax and chill. I like the clarinet solo by Buddy Collette on this one.

“Eclipse” is very much a song about those hard days when it seems like the day will never end. But, as this gentle song implies, eventually the sun will set and a new day will be presented to us again.

“Sweet Surrender” was released as a single not from this album but from his concert album the following year. That version reached number 13 on the Billboard Top 40. The lyrics focus on self-exploration as well as nature and the environment. I like how the song starts gentle and soft before slowly building to the sweeping chorus.

The album closes with “This Old Guitar”, an ode to Denver’s musical instrument that has been with him through out his life, in the good times and the difficult times.

When Back Home Again was released in 1974, I was just nine years old and in elementary school. Back then, country music crossed over a lot as evidenced by how well some of the songs from this record did on the pop charts. And you could see performers like Denver on TV variety shows and specials all the time. Listening to this album today reminds me of those times, when things weren’t so musically segregated. Sometimes that variety is good to make you appreciate all different kinds of music.
Posted by Martin Maenza at 4:30 AM