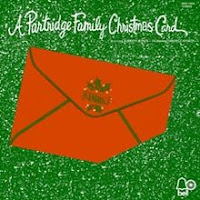 Welcome to another edition of Seventies Saturday. Seeing as Christmas is just a few weeks away, I thought I would start to sprinkle in a few holiday albums for the season.

In December of 1971, the Partridge Family TV show was going strong in its second season on the ABC network. It is no surprise either the thirteenth episode which aired December that year would include a holiday themed offering. "Don't Bring Your Guns To Town, Santa" was the story of how the family's bus breaks down in a ghost town in the middle of nowhere which forces them to miss Christmas. I remember this episode fondly from the years the show ran in syndication locally during the late 70's; it was especially a favorite around the holiday times.


Clearly the episode was meant to cross market to the holiday themed Partridge Family album that was also hitting the store shelves at the same time. The sleeve for the original vinyl release of A Partridge Family Christmas Card included a reproduction of a Christmas card signed by the entire cast of the sitcom. Musically, like all the albums put out by the group, it features lead vocals by David Cassidy and Shirley Jones with studio players providing the music and the backing vocals.

Side one opens with the one original tune, a song called "My Christmas Card to You". Musically the song is very much in the style of group's other songs, a mid-tempo pop number with a positive, romantic message. Cassidy's lead vocals are backed by familiar "la la la's" and "ooo ooo ooo's". Honestly, it doesn't have much to make it a standout or distinctive song.

Next up is a version of the Irving Berlin classic "White Christmas", first recorded by Bing Crosby in 1941. I do like the arrangement here. The guitar has a gentle soft rock lilt to it, and Cassidy delivers a warm and comforting vocal to go with it.

The earliest recorded version of "Santa Claus Is Coming to Town" was in 1934. The Partridge version keeps it up-tempo and poppy, with an echo "he's comin' comin'" backing vocal.

Though written and first recorded in 1948, "Blue Christmas" was made very popular by Elvis Presley in 1957. The version on this record has a bluesy rag-time piano accompaniment to Cassidy's swoon-worthy crooning.

"Jingle Bells" dates back to 1857 and was originally written for the Thanksgiving holiday. The Partridge version builds in tempo as the first verse bobs along to the chorus.

Closing the side is "The Christmas Song", a track that Jones takes the lead on. Her vocals are pitch perfect and pleasant. The original was written and performed by Mel Torme in 1944.

Brenda Lee had a hit with the original "Rockin' Around the Christmas Tree" in 1958. The version that opens side two of this album takes a slower tempo and features a prominent lead guitar. I think changing up the rhythm gives it a freshness.

The standard "Winter Wonderland" was written in 1934. Cassidy and Jones duet on this one, showing how well the two worked together. It is that chemistry that made the sitcom so enduring as well.

Gene Autry first recorded "Frosty the Snowman" in 1950. Cassidy's take on the song is more of a mellow, melancholy approach as if reflecting on the events after the magical snowman departed for cooler climates.

"Sleigh Ride" started out as an orchestral classic in the late 1940's; the Andrew Sisters added vocal lyrics in 1950. Jones takes the lead on this one; while it is an enjoyable version there are other takes on this song that I am more inclined to choose over this one.

The album closes with "Have Yourself a Merry Little Christmas", a song originally recorded in 1944 by Judy Garland for musical Meet Me in St. Louis. If I remember correctly this was one of the songs from the album that appeared in the TV episode (I need to break out my Season 2 DVDs and confirm that - good excuse to watch the episode again, as if I needed an excuse).

A Partridge Family Christmas Card was the best-selling Christmas album in the US during the holiday season of 1971. It sat at the number 1 position on the Billboard magazine Christmas Albums sales chart for the entire month of December that year. 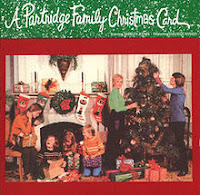 In 1993, a CD version of the album was released that featured an alternate cover showing the show's cast decorating for the holidays. The songs have also been made available as mp3 downloads in recent years from all the popular sites (iTunes, Amazon, etc.).
Posted by Martin Maenza at 4:30 AM

What the--Martin you MUST be psychic, I was just listening to this (on my laptop) yesterday morning at the office!

Okay while I happily admit to owning all the Partridge Family albums (including this one), this album is probably my least favorite one. I love the PF but their renditions of these standards are not very original. HOWEVER, I must beg to differ with you regarding "My Christmas Card to You"--the song, for me at least, is pure 70's cheesy Holiday magic.

Doug, I knew you'd appreciate this one! I do agree that this is the least favorite of the PF albums for me as well (and, yes, I own them all as well - either in CD or digital format).

Merry Christmas to you too, my friend.

I am extremely impressed with your writing skills as well as with the layout on your blog. Is this a paid theme or did you modify it yourself? Either way keep up the excellent quality writing, it’s rare to see a nice blog like this one today..

The layout is a free theme of blogspot's. I just added the iPod image to be tiled (I love my iPod).