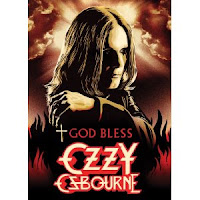 There is no doubt in anyone’s mind that Ozzy Osbourne has lived a very infamous rock and roll lifestyle. From the days of Black Sabbath in the 70’s to his solo career in the 80’s to the Osbournes reality show on MTV in the 2000’s, his life has always been one of public display with over-the-top moments.

In 2011, his son Jack Osbourne and film directors Mike Fleiss and Mike Piscitelli put together a documentary film entitled God Bless Ozzy Osbourne, a very intimate and honest look at the rock legend’s life. Starting with growing up as one of six children of a factory worker in war-torn Birmingham, England, it chronicles the events of Ozzy’s career and personal struggles, ending with the over-60 rocker still touring to sold-out arena stadiums all over the world.


For someone not fully versed on Ozzy’s life, outside of the few stories I remember hearing over the years, this was an enlightening documentary for me. I found it well-paced and informative.

I never knew that Ozzy tried his hand at crime (and did time for robbery) as a teenager. Nor did I know that it was the success of the Beatles that inspired him to get into music. The classic footage of Sabbath performances looked and sounded amazing. I found it touching that the original cross that the Black Sabbath members all wore onstage were in fact made by Ozzy’s father in the factory for them.

Moving into the 80’s and his solo career, his deep friendship for Randy Rhoads presents another key point, only to be cut short by Randy’s tragic death in 1982. It was perhaps this loss, followed so soon after the death of his father in the late 70’s that pushed Ozzy into a complete downward spiral that only the love a good woman (Sharon) and the actions of his own son (Jack) could eventually snap him out of.

The film was not made to glorify the rock star’s image.

More to the point, it tells the tale of how excessive use of drugs and alcohol not only cost Ozzy a lot with his career but also with those he loved. We see honest moments with his children, both those from his first marriage to Thelma and those from his second marriage with Sharon. The general consensus from all five is that while Ozzy provided for them, which he felt as a father that was his job, he simply was not there for them as a father needs to be. At age sixty, he eventually realizes that being a parent is about so much more than putting a roof over their heads and food on the table; a father needs to be there for his children emotionally and interactively. Ozzy’s excessive substance abuse denied his children of that.

It is interesting to see the contrast of those abuse days with how Ozzy is today. Five years sober and counting, he has a pre-concert regime of exercise (physical and vocal) as well as spiritual thanks to God for giving him another day to do what he loves - perform. Unlike the days of the 80’s when it was nearly impossible to separate his onstage persona from who he really was, the Ozzy of today appreciates what he has and can find quiet moments of peace in simple things like art or just taking himself out for a drive.

The message that God Bless Ozzy Osbourne is trying to deliver is this: that everything we do in life effects the outcome. Some can lead to great things. Some can lead to real low-points. In the end, we have to own up to our actions, push past those bad choices and try to put as much on the positive column as we can.

The DVD includes the original feature film (rated R for language (the British do seem to like to drop the F-bomb a lot), drug references, nudity) along with a number of bonus features like a Q&A with Ozzy and son Jack, a number of deleted scenes, and footage from the Tribeca Film Festival. All told, the running time on the complete DVD package is 135 minutes.
Posted by Martin Maenza at 4:29 AM