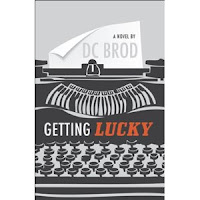 DC Brod is an American author from Illinois who, per her official website, attended two Beatles concerts in her younger days. She lists as her writing influences Tolkien's Lord of the Rings, Ray Bradbury, Frank Herbert's Dune, Harper Lee's To Kill A Mockingbird, among others. Her published work includes 2005's Heartstone (a modern day Authurian thriller), a series of novels about head of security Quint McCauley (from 1989 to 2000, available in the Kindle format) and 2010's Getting Sassy, the first novel starring freelance writer Robyn Gutherie.


Getting Lucky, available in paperback format and on the Kindle, finds Robyn Gutherie embroiled in a new mystery. When a young reporter Clair Powell is killed in a hit and run accident, Robyn agrees to finish the story Clair was doing on an environmentally-friendly housing development for the local newspaper. However, she soon learns that there is more to Cedar Ridge than meets the eye. This is further complicated for her on some personal fronts: one involves an old high school rival who is connected to the development and the others entail her relationships with her aging mother, and with her boyfriend Mick.

I must admit that it took me awhile to get into this three hundred and thirty page novel; the story didn't really grab my attention fully until I got through the first hundred pages or so. A lot of this involved establishing the relationships between Robyn and her mother, and Robyn and Mick, which can be useful for a reader who had not read Getting Sassy. I think perhaps this could have been a bit more tightly edited to keep the story flowing. Once Robyn got into the meat of her investigation, I found myself very engaged. The story then started to come undone for me in the last thirty pages as Brod attempted to tie up all the loose plot threads, sometimes too conveniently. I would have liked to see a bit more repercussions for or growth from the protagonists.

The characterization in the book was also a mixed bag for me. Some of the cast is painted with less detail, which works out fine in some cases (like sons of one of the development's tenants or Mercedes, the daughter of Lucky). However, some other characters could have benefitted with more pages devoted to them. Reversely, there are times when the author spends too much time on characters that aren't as pivotal to the key plot points (Claire's parents or Robyn's boss the paper, for example). It is in some of these areas I think the book could benefit from a little revision. Finally, there are some spots where character (re)actions seem a bit too convenient to move the story along; I didn't find them as believable as I should.

I did read a galley of the book, so it is possible that some of these points were addressed in the final product. Even if not, the story was a fair escape read with a very real-world plot and relatable characters.

I certainly would not be adverse to picking up other books by DC Brod. In fact, the idea behind Heartstone intrigues me enough to seek that one out. I'd really like to see what the author can do with fantasy or sci-fi genres given those types of books appeared on her influences list.
Posted by Martin Maenza at 4:55 PM