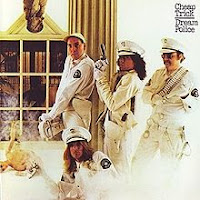 In late September of 1979, Nielsen and his band-mates of Cheap Trick released their fourth and best selling studio album Dream Police. The record went to number 6 on the US Billboard Album chart, number 7 in Australia and number 4 in Japan; it was certified platinum by the time the decade ended a few months later.


With this album, Cheap Trick began to compose longer and more complex songs. They also added orchestral elements to their standard three-guitar/one-drum foundation.

Side one opens with the title track. “Dream Police”, the first single, spent five weeks in the US Billboard Top 40 and reached number 26. The single went to number 4 in Canada. I’ve always enjoyed this song. I like how the verses are done in a slower tempo which explodes with hook-laden chorus. The music sets an urgent, paranoid mood to go with the quirky lyrics about a governing force that can see into one’s sleeping mind. You can’t help but turn it up and sing along at the top of your lungs.

Don‘t let the slow opening fool you; “Way of the World” keeps up the rapid-fire rocking tempo. Lead singer Robin Zander really has a powerful voice and can sustain those notes for a good long while.

“The House Is Rockin’ (With Domestic Problems)” opens with a great guitar duet by Nielsen and Tom Petersson, the co-writers of the track. Bun E. Carlos delivers another driving drum beat that keeps pace with the wailing axes. The song is a hard-rocking look at a troubled couple who raise the roof with their fighting.

Carlos sets the stage at the opening of “Gonna Raise Hell” with a steady beat. The guitars sizzle on this one like a white hot burning flame. As the song builds to the full nine minutes, the orchestration comes in as well; it almost takes on a hard rocking/disco taste to it. I am sure this one really got the crowd chanting and thrusting fists into the air when they played it live.

Side two starts with “I’ll Be With You Tonight”, the one track on the album that all four guys contributed to the composition.

As the second single, “Voices” spent three weeks on the charts and went to number 32 on the Billboard Top 40; in Canada the song went to number 12. The song has a much slower tempo from those tracks that come before it. The way the vocals are layered reminds me a little bit of the Electric Light Orchestra.

The respite doesn‘t last long though. “Writing on the Wall” kicks things back into high-gear with another quick-step rocker. The lyrics do a shout out to many cities around the world.

“I Know What You Want” has a punk attitude to it, both lyrically and musically (even though the tempo is more restrained in sections and thus making it more of a punk-lite in sound).

For the final track, “Need Your Love”, the band went back to the hard rock style of their earlier songs. The seven-and-a-half minute song takes its time to work into a heavy groove before Zander’s both sweet and stern vocals kick in.

The 2006 CD release of the album included four bonus tracks: live versions of “The House Is Rockin’ (With Domestic Problems)”, “Way of the World” and “I Know What I Want”, and a version of “Dream Police” without the string section parts.

When Dream Police came out, I was in eighth grade and my older brother was a senior in high school. This one hit his turntable a lot back in those days. It was definitely a favorite on the album-rock station we listened to at the time; Cheap Trick had found that mix of musical styles that appealed to a wide audience. Thirty-two years later, this album holds up pretty well in my view.
Posted by Martin Maenza at 4:30 AM