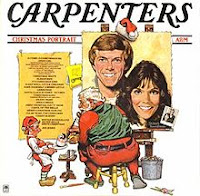 Back when I was a kid growing up in the 1970’s, we only had three network channels on television. When the holiday seasons rolled around in December each year, it was always magical to enjoy the various specials that came on each night. Yes, we had the many animated classics that still survive today but we also got to enjoy brand new variety show specials that were headlined by popular musical acts. One of those acts that did just that was the Carpenters.

Spinning out of specials from 1976 and 1977, siblings Karen and Richard Carpenter decided to put out an album of holiday songs. The result was 1978’s Christmas Portrait which led to another special that December. The record, a mix of popular and secular holiday songs, sold over one million copies.


Side one opens with an a cappella “O Come, O Come, Immanuel” by Richard.

Next is an instrumental “Overture” made up of a number of standards including “Deck the Halls”, “I Saw Three Ships”, “God Rest Ye Merry Gentlemen“, “Away in a Manger” and more.

Karen‘s first vocals of the album appear with “The Christmas Waltz”, a song originally composed by Sammy Cahn and Jule Styne. It brings to my mind grand ballroom dancing.

“Sleigh Ride”, also sung by both sister and brother, starts with a slow verse before picking up the pace to a jaunty tempo. They definitely put their own stamp on this classic.

Richard‘s piano playing abilities are prominent at the beginning of the medley “It’s Christmas Time / Sleep Well, Little Children”. I’m not a big fan of the choir used on this one; when it comes to the Carpenters I am a purist and would rather just hear Karen and Richard singing.

I do like their rendition of the Judy Garland classic “Have Yourself a Merry Little Christmas”. Karen’s voice is sweet and sentimental while the choir is used very sparingly.

Next is a short (just over a minute), very quick-tempo take on “Santa Claus Is Comin’ to Town”.

That leads directly into a rendition of Mel Torme‘s classic “Christmas Song (Chestnuts Roasting on an Open Fire)”.

The side closes with an angelic rendition of “Silent Night”; Karen’s voice shines like a beacon star in the night.

Side two begins with very animated version of “Jingle Bells”. The music brings to mind childhood joy of snowy weather and toys.

“First Snowfall / Let It Snow” is a different medley as the first of the two tracks is probably a lesser known composition. That sort of makes it fresh like a new layer of winter snow, bright and untouched.

“Carol of the Bells” is a short instrumental interlude that spotlights on Richard’s piano mastery.

“Merry Christmas Darling” is an original holiday song written by Frank Pooler and Richard Carpenter in 1970; it went to number 1 on the US Billboard Christmas singles chart in 1970, 1971 and 1973. Since then it has been covered by many artists, making it too a holiday standard. This song is my favorite from the album specifically Karen was the first to perform it. It is very much her Christmas song.

“I’ll Be Home for Christmas” was originally written in 1943 by Kim Gannon, Walter Kent and Buck Ram, recorded by Bing Crosby. This version sticks to a slower tempo with a whisk-brush percussion and soft string orchestration. This allows Karen’s voice to shine.

“Christ Is Born” is a composition by Ray Charles and Dominico Bartolucci. This is not one I am overly familiar which in turn makes it rather new even though the recording is decades old.

The Carpenters present one final medley with “Winter Wonderland / Silver Bells / White Christmas”. This one opens in a big way with pomp and flash. The middle section has a unique flavor to it, mixing a number of musical instruments and styles. The final section sticks to a standard presentation (sometimes you don’t have to do much to a classic like that) with Richard closing it out on the piano.

The record closes with Charles Gounod’s and Johann Sebastian Bach‘s “Ave Maria”. I like that Karen sings it in the original Latin.

Over the decades, many of the songs from Christmas Portrait have become pop radio standards during the holiday times when some local radio stations switch over to this format from late November through December 25th. I think a lot of that is due to Karen Carpenter’s pleasing vocal style, so warm and welcoming. I know that when I am required to listen to those channels (or the XM holiday channels in my van on those long trips to visit family in late December), I always smile a bit when one of the Carpenters’ tracks comes on.
Posted by Martin Maenza at 4:30 AM

All I know is that I could listen to Karen Carpenter sing a phone book. I sampled this album recently, and I loved it. Very cheesy adult contemporary 70's pop -- and worth every second.

Derek, me too - I could listen to Karen sing just about anything. There is nothing wrong with cheesy adult contemporary pop sometimes - just to cleanse the musical palette.